Is developmental catch-up within the global capitalist system possible? ‘The current success of emerging countries in terms of accelerated growth within globalized capitalism and with capitalist means reinforces the illusion that catching-up is possible’ (Amin 2011: 12). In this post, I will critically engage with (neo-) liberal promises of catch-up by looking more closely at Samir Amin’s book The Law of Worldwide Value (2010).

In a liberal understanding of capitalist development, free trade is regarded as a win-win situation, a positive-sum game. As David Ricardo famously argued, if every country concentrates on producing and exporting at what it is best, i.e. its comparative advantage, and engages in trade for all the other necessities, an optimum outcome with everybody benefiting will be the result. Neo-liberal economic thinking about the extension of free trade in times of globalisation builds on this understanding. States should refrain from intervening into the economy and deregulate and liberalise markets including the labour market in order to facilitate free trade. If developing countries open up to free trade and foreign direct investment, development would follow and allow them to catch up with developed countries. Ultimately, all countries would be able to reach similar levels of development and current differences be evened out over time. 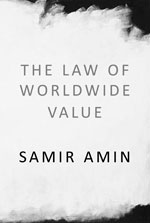 Samir Amin contests the idea of global levelling as a result of capitalist development. ‘Historical capitalism’, he argues, ‘as it has really existed, has always been imperialist in the very precise sense that the mechanisms inherent to its worldwide spread, far from progressively “homogenizing” economic conditions on a planetary scale, have, on the contrary, reproduced and deepened the contrast, counterposing the dominant (imperialist) centers to the dominated peripheries’ (Amin 2010: 84). In other words, rather than developmental catch-up, what we have witnessed over recent decades is an increase in inequality between capitalist core and periphery. This is also expressed in different wage developments. ‘Whereas, at the center, real wages have risen gradually for the past century, parallel with the development of the productive forces, in the periphery the absolute pauperization of the producers exploited by capital has revealed itself in all its brutal reality’ (Amin 2010: 48).

In order to understand the dynamics underlying the increasing inequality at the global level, it is important to realize that we need to understand capitalism as a global system, not as different national economic-political models. Hence, ‘this means that labor-power has but a single value, that which is associated with the level of development of the productive forces taken globally’ (Amin 2010: 84). The main cause for the transfer of surplus-value from the periphery to the core in processes of trade is here the difference in productivity rates, not the different nature of the goods that are traded as such, e.g. raw materials for manufactured machinery. As a result of higher productivity levels in the core due to the more advanced development of capitalism, when the core trades its goods with products from the periphery, based on lower productivity levels, more profits are accumulated in the core (Mandel 1975: 66, 359 and 368). ‘On the world market, the labour of a country with a higher productivity of labour is valued as more intensive, so that the product of one day’s work in such a nation is exchanged for the product of more than a day’s work in an underdeveloped country’ (Mandel 1975: 71-2). A situation of unequal exchange is the consequence, further deepening the inequality between core and periphery.

Importantly, development in the periphery is not independent and adjusted to the needs of the periphery, but dependent on, and subordinated to, development in the core. ‘In the periphery model, the articulation that governs the reproduction of the system links exports (the motive force) to (induced) consumption. The model is “outward-turned” (as opposed to “self-centered”). It conveys a “dependence,” in the sense that the periphery adjusts “unilaterally” to the dominant tendencies on the scale of the world system in which it is integrated, these tendencies being the very ones governed by the demands of accumulation at the center’ (Amin 2010: 89). The periphery, thus, performs two key functions in its support of capital accumulation in the core. First, it supplies the essential raw materials, necessary for the high-value added production processes in the core. Indeed, securing access to these raw materials in Africa, for example, has already led to rivalry between China and industrialised countries in the West. Second, countries in the periphery function as markets for excess production in the core. Hence the attempts to impose 'free trade' on developing countries. As a result, peripheral countries are not backward, but super-exploited by the core. ‘“Catching up,” in the sense given to this expression by the false “stages of growth” theory, becomes impossible within the framework of “really existing capitalism,” imperialist by its very nature’ (Amin 2010: 90).

Of course, double digit growth rates in China over recent decades have been impressive. At the same time, this development should not be exaggerated. First, because China is predominantly integrated into the global economy through its vast resource of cheap labour. Second, and here we need to go beyond Samir Amin’s at times state-centric focus, because uneven and combined development does not only characterise capitalist development at the global level between countries in the core and countries in the periphery, it also characterises development within countries themselves. Especially processes of combined development are being played out at the national level in peripheral countries (Davidson 2010). ‘They may have adopted the most modern forms of technology, industrial organisation and scientific thought in certain areas, but most of society remains at a much lower level’ (Davidson 2006: 211). Hyper-modern Chinese coastal regions are counterpoised to backward inland areas in China. As Jane Hardy and Adrian Budd point out, ‘in 2010 (even after the aftermath of the crisis and recession) China’s GDP was $5.9 trillion—only 40 percent of the US’s $14.6 trillion. Translated into GDP per head this gap is even starker: China’s $4,260 was only 9 percent of the US’s $47,240’ (Hardy and Budd 2012). In short, catching up and overtaking the US is highly unlikely even in the case of China.

Hence, what is ultimately required for developmental catch-up in the periphery, according to Samir Amin, is an audacious programme for the radical left, which socializes the means of production, de-financialises the economy and delinks national development from the global economy and this all being based on a complete democratization of society including the economy. ‘Audacity’, Samir Amin concludes, ‘is what is necessary to bring about the autumn of capitalism that will be announced by the implosion of its system and by the birth of an authentic spring of the people, a spring that is possible’ (Amin 2011: 30).

Amin, Samir (2011) ‘The Implosion of Global Capitalism: the challenge for the Radical Left’, paper presented at the workshop Trade unions, free trade and the problem of transnational solidarity; Nottingham University/UK, 2-3 December.