The global financial crisis and service provision: The public sector in difficult times.

Public sector restructuring is generally justified with reference to the need to save money in view of large public debt resulting from the global financial crisis. In this post, I want to investigate this claim and unravel the real motivations behind current attacks on the public sector.

The need to save money

The standard narrative is clear. When the US sub-prime mortgage crisis spread across the global financial markets in 2007 and 2008, governments had to bail out banks in order to avoid economic collapse. When the financial markets froze due to mistrust between banks, states in turn started to have problems re-financing national debt. This resulted in the Eurozone crisis. Whether it is Greece, Portugal, Ireland, Spain, Italy or countries such as the UK, the general slogan has been that savings have to be made in order to re-gain control over national debt levels. In other words, there was only one way forward: austerity! In the UK, this implied cuts in public sector jobs, an attack on wages and pensions of public sector workers, cuts in the provision of public services, as well as privatisation through a focus on public-private partnerships amongst other measures.

Nevertheless, is public sector restructuring really about saving money? Changes in the funding of Higher Education in the UK are an example, which proves otherwise. The current government replaced teaching grants for universities with an increase in tuition fees of up to £9000 per year. At the same time, the government provides students with access to loans, with which they can pay these high levels of tuition fees. As it is expected that these loans are paid back in the future, this expenditure does not appear on the budget. The potential long-term consequences are, however, potentially dramatic. Considering that students only have to pay back, once they earn a certain amount of money, the percentage of these loans, which are paid back, is not fully clear and can only be estimated. The government predicts a loss of 32 per cent, others of up to 37 per cent. If it is the latter, there would be an additional £680 million per year of costs (see The Great University Gamble). Considering the large amount of money involved overall - £191 billion of outstanding student debt by 2046 – this scheme resembles more high-risk gambling and is not at all about saving public expenditure.

Another justification for public sector restructuring is related to the argument of making service provision more efficient. It is this slogan, with which already the New Labour governments under Tony Blair had embarked upon turning the public sector upside down.

Privatisation is generally at the heart of public sector restructuring. The ideological rationale for this argument is clear. The introduction of competition will result in four positive changes: it will (1) increase efficiency, (2) improve quality, (3) lower the cost to consumers, and (4) companies can still make profit (see also The perpetuum mobile of privatisation). Nevertheless, the reality of privatisation is rather different. Instead of improvements, what we generally find are higher consumer charges, lower service quality, worse working conditions and salaries for employees, as well as increasingly uneven access to basic services.

The first example in this respect is water privatisation in the UK. In an interesting article for the Guardian, Aditya Chakrabortty reveals the reality behind Thames Water (The Guardian, 15 June 2014). The workforce has been cut by two-thirds and its service record is dismal. There are five intermediate firms between the actual water provider and the eventual shareholders; five intermediate firms, which are all interested in increasing their profits. An assessment of Thames’s accounts between 2007 and 2012 is sobering. ‘In three of those five years, investors took more dividends out of the business than it raised in profits after tax. Bung in interim payments, and there was only one year in which the consortium of shareholders took less out of the company than it had in post-tax profits. What replaced the profits? In a word: debt, which more than doubled to £7.8 bn in that period’. At the same time, employees have experienced increased workloads and worsening pension schemes, while Thames Water ‘admits it won’t pay any [corporation tax] for the next six or seven years’. Efficient service provision looks clearly different.

A second example of water privatisation in Italy reveals similar mismanagement. When water services were privatised in the central Italian city of Arezzo in the late 1990s, this came with the usual promises of lower charges, better quality and higher levels of efficiency. And yet, 15 years on water charges in Arezzo are amongst the highest in Italy and four times as high as in the Northern Italian city of Milano, where the company is still fully owned by the public in a joint stock company (see also Fighting against water privatisation in Italy: Road to Victory). In short, public sector restructuring is not about more efficiency either. What is then the real purpose?

We are currently experiencing what David Harvey refers to as a crisis of overaccumulation, in which large amounts of private capital looking for profitable investment opportunities and huge numbers of unemployed workers can no longer be brought together in a meaningful way. It is in this situation that public sector privatisation offers an excellent new growth point for profit-making; excellent, because service provision is ultimately backed up and secured by the state.

Be it Higher Education, be it the health service, huge private investment funds are currently circling like vultures above the UK, ready to snap up whatever profitable business the ConDem government is prepared to give them. Discourses about having to save money or wanting to make service provision more efficient are nothing but a smokescreen, behind which the motive of profit maximisation rules supreme. And yet, privatisation pressures and austerity have not gone unchallenged. There are concrete alternatives being put forward.

The first example is from the successful referendum against water privatisation in Italy in June 2011 (see The Struggle for Public Water in Italy). Opponents to water privatisation were clear that just because a service is run by the state does not mean that the service is run efficiently. Hence, they proposed a new model of how to organise water services. They suggested treating water as a commons, organising its administration with the direct participation of workers as well as citizens/consumers. It is in the city of Napoli, where currently a first experiment along these lines is carried out with the goal of finding a way forward beyond the dichotomy public versus private. 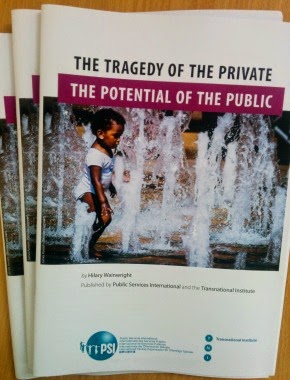 The second example is from Norway. Here too, opposing privatisation has not meant that people did not realise that improving service provision is important. Hence, they established the Model Municipality Project, in which workers, involved in the frontline delivery of services, are encouraged to participate with their expertise in making service provision more efficient. Unlike privatisation, in which efficiency is often equated with redundancies, here the focus is on improving the experience of consumers without any job losses (Wainwright 2014: 31-2). It is a focus on such alternatives, which is ultimately the only way forward of making service provision more efficient while retaining the principle of universal access.