Organising the Unorganisable? Voices from the Bottom Up. 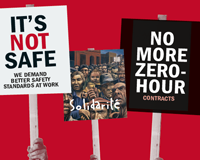 As a result of neo-liberal restructuring, the informalisation of work in the global economy has been intensified. While precarious forms of labour have always been predominant in the Global South, they have increasingly also spread into the Global North. As a result, trade unions are under pressure, as it is much more difficult to organise a workforce in temporary, vulnerable and constantly changing employment relations. And yet, there are also examples of successful organising campaigns by precarious workers. In this blog post, I will discuss some of the key themes, which were discussed at the excellent workshop Organising the Unorganisable, brought together by Maurizio Atzeni and held at Loughborough University on 23 and 24 April 2014.

The importance of worker empowerment

Jeronimo Montero outlined efforts by the Argentinian state of addressing the exploitation of workers in textile sweatshops in Buenos Aires and other parts of the country. Working conditions are generally atrocious with shifts of up to 16 hours per day, payment on piece rates and workers being locked up in factories during their shifts. However, because the employers and workers are from the same country, Bolivia, tensions resulting from these conditions are often solved ‘within the community’ including mediation by the Bolivian embassy. In response, the Argentinian Ministry of Labour has started to reflect on the possibility of not only making brand owners responsible for the working conditions along the whole supply chain, but also to ban homework in the sense that individuals are not allowed to employ others within the confines of their own home.

While well intended, however, colleagues at the workshop were sceptical whether state intervention was the best way forward, considering that this may also threaten workers’ livelihood at times. Instead, the focus has to be on the empowerment of workers, it was argued, so that they are in a position to struggle for better conditions themselves. Several presentations at the workshop offered excellent examples of this practice. Ralf Ruckus in his presentation on industrial conflicts in China demonstrated how the recent wave of resistance and struggles for better working conditions had been organised and co-ordinated by worker activists in the workplace, rather than institutionalised trade unions. Fabiola Mieres, in turn, reported on the Coalition of Immokalee Workers made up of migrant workers in Florida/USA and their struggle for better working conditions in agriculture. In their 2001 Campaign for Fair Food they succeeded in establishing a worker-driven Corporate Social Responsibility scheme. Here, workers are involved in the drafting of their own working conditions as well as the monitoring of the implementation.

Another example of empowering workers to act themselves for better conditions was presented in the project by Jess Whelligan from the Global Labour Institute in Manchester. The Informal Workers Blog, commissioned by the International Transport Workers' Federation (ITF), brings together the experiences of six trade unions in the Global South in organising informal transport workers. The union SYNATRA in Niger, for example, has succeeded in organising informal workers in transport regardless of whether they are drivers or simply selling food in bus stations. As negotiating partners, they have established links with bus terminals or local authorities as their counterparts. On some issues, they even negotiate with the national government. Importantly, as a result of SYNATRA’s activities these informal workers have become visible as well as empowered. People have been put in a situation of being able to fight for their rights.

The case of the dock workers in Chile presented by Lucas Cifuentes was a further demonstration of the potentiality of building power and organisation from the bottom up. In a country like Chile, highly dependent on the export of a few primary commodities like copper, ports are essential to the economy, putting workers of the sector in a very strategic position vis-à-vis capital. However, the particular geography of port distribution along the long Chilean shores and a history of anti-workers politics have fragmented workplaces and always played against a strategy based exclusively on workplaces. As the recent activism of dock workers has demonstrated, to avoid isolation, broader national alliances are needed with workers in other ports, with other groups of strategic workers as, for example, the subcontracted miners, but also with other exploited groups of the population such as students.

The plight of informal, migrant workers in the Global North

Migrant workers in the Global North are often amongst the most exploited people. When cleaning contracts were outsourced at the University of London, the livelihood of many workers predominantly with a migrant background was put into danger, their conditions being vastly inferior to those workers, employed by the University directly. Initial wildcat strikes resulted in the concession of being paid the London living wage. Nevertheless, as Gabriella Alberti and Jason Moyer-Lee outlined, the workers wanted more and demanded equal conditions to University employees in the area of sick pay, pensions and holidays. When their union Unison refused to back the campaign, the cleaners joined in large numbers the Independent Workers’ Union of Great Britain (IWGB) and started their ‘3 Cosas’ campaign for sick pay, holidays and pensions.

Importantly, the campaign was organised around strike action by the workers themselves. Nevertheless, because the cleaners worked for a company sub-contracted by the University, there was no direct link with the main employer. Hence, there was a need for a broad alliance between the workers and the wider community and workplace based and community based struggles were combined. The campaign made innovative use of social media in the form of clips on youtube. It established links with the national press and organised a country-wide speakers’ tour as well as a ‘Bus for Justice’ touring through London. This community based actions were combined with strikes and direct action initiatives. In the end the cleaners, strongly supported by students and academics, won a victory and gained at least holidays and sick pay.

While these forms of outsourcing services put workers under additional pressure, there are always possibilities to resist. Especially in services, alliances between trade unions and the wider community and other social movements can be a constructive as well as successful way forward (see also United Voices of the World: The Struggle for Justice for Cleaners).

The key role of logistics in the global political economy

Large warehouses and general logistics about how to get goods to customers occupy an increasingly central role in capitalist accumulation. At the same time, working conditions in these warehouses are often highly exploitative. As Magda, a member of Angry Workers of the World, reported from warehouses of UK supermarkets Sainsbury and Waitrose, the workers employed on zero hour contracts by the agency Templine have their productivity levels monitored on an hourly basis through an electronic system. Nevertheless, divisions between workers from different ethnic backgrounds and between permanently employed and temporarily employed workers make resistance difficult.

But yet again, this does not mean that strike action is impossible. Devi Sacchetto and Giorgio Grappi told the story of strikes in Italian warehouses in 2013. First, workers, 90 per cent of whom had a migrant background, had left the traditional, mainstream unions and joined independent, rank-and-file unions. Then they organised themselves from within these unions successfully and started strike action and the blockade of huge warehouses. Here too, links were built with social centres as well as pro-migrant rights groups resulting in a strategy of large demonstrations combined with strike action, raising the issue of migrant workers’ documents in tandem with highly exploitative working conditions. Thus, the traditional industrial struggle for better working conditions was transformed into a struggle for broader migrant rights. In short, every struggle for migrant rights needs to include labour and every struggle for workers’ rights needs to include the question of migrant rights.

Importantly, because of the centrality of transport for today’s economy, a strike at warehouses has potentially a broader impact on the capitalist economy, reflecting workers’ new source of logistical power.

Where does power lie?

Bringing about change towards a more socially just future always also raises the question of power in society. A discussion of where power lies concluded the workshop. Kim Moody and Sheila Cohen emphasised the importance of the workplace. Social movements, they argued, would often overlook the key role of labour and its ability to put employers under pressure and threaten the process of surplus accumulation by withdrawing their labour power. Hence, organising workers in the workplace had to be key for trade union strategies. Co-operation with other social movements, by contrast, would only be a cop-out by unions unwilling to change themselves and adapt to new realities at work.

Other colleagues were not convinced by this outline. Of course, the workplace is important, but have struggles around ethnicity and gender not demonstrated that work and the workplace need to be understood in a much broader way? Importantly, the social reproduction of labour does not only occur through wage labour, but is taking place in the whole sphere of social reproduction including, for example, work at home. The notion of ‘social factory’ by Harry Cleaver, going beyond wage labour, and encompassing all areas of labour reproduction is a better reflection of this reality and allows us to include struggles over ethnicity, gender and the environment in our analysis of class struggle against exploitation (Bieler 2014).

Equally, it is too limited to understand trade unions’ attempts at alliances with other social movements simply as a strategy of avoiding change. The examples of the 3 Cosas campaign as well as strikes by migrant workers in warehouses in Italy (see above) demonstrate clearly the power of industrial action which combines strikes, the withdrawal of labour, with broader alliances within the wider community. Ultimately, the key question is what unions are for. If they only co-operate with other social movements to recruit new members in order to maintain their existing bureaucratic structure, then not much change can be expected. However, if they co-operate in moments of concrete struggle against exploitation with a clear objective, then there is a chance that individual union activists and the union itself become transformed into new agents. Class struggle is at the heart of developments and it is class struggle in which identities and interests are formed and transformed. Trade unions, as one colleague commented, are terrains of struggle and it is in moments of class struggle that they can be moved towards becoming a more radical, revolutionary agent.