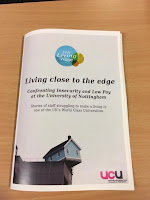 The Living Wage is an hourly rate, currently £8.45 outside London, set independently and updated annually in November by the Living Wage Foundation.

Our first speaker was Jane from the Five Leaves Bookshop in Nottingham. Although a small business in a highly competitive market with big book store chains and online retailers, employees are still paid the Living Wage, she pointed out. Importantly, this acknowledges that all workers, whether they are 18, 21 or 25 years old, are in need of a Living Wage. There must be no age discrimination. In turn, Greg Marshall (Labour Party), a Broxtowe Borough Councillor, told the meeting that the local council does not only pay the Living Wage, but also seeks to ensures that all the suppliers pay their employees a Living Wage. This clearly demonstrates the importance of local government for the economy and fair wages as a whole.

Against the background of austerity and severe cuts imposed on local governments by the national government, Toby Neal (Labour Party), a Nottingham City Councillor, outlined how the council has, nonetheless, managed to move towards paying a Living Wage to all its employees and ring-fenced funding in this respect for at least the next three years. Importantly, a Living Wage is not only good for employees, but also the employer. Since the Council paid the Living Wage, the amount of days employees have been on sick leave per year has drastically declined.

Sajid Mohammed from the local, grassroots charity Himmah that runs a food bank amongst other things, illustrated the close relationship between low wages and the increase in number of people depending on free food from food banks. "A cleaner, with 3 jobs, uses our food bank. These are real working people who are struggling to live due to their low pay." Clearly, a Living Wage is a matter of decent living as well as personal dignity. Nobody should find herself/himself in a situation of having to go to a food bank in the first place. ‘I don’t want to run a food bank’, Sajid concluded.

Poverty pay and insecure working conditions at the University of Nottingham

‘My wages here just cover my Council Tax and rent. I’m paid on Thursdays at the end of the month, by Saturday I am already overdrawn again. I cut down on all bills as much as possible, I use the car only to go to work, all my expenses have to be tightly calculated. I depend on bargains when shopping for clothes and food, things on half-price, the sales. I don’t go out, I simply can’t afford to go out’ (Cleaner, Personal Testimony).

‘Management is never satisfied. We are not allowed any breaks or take drinks, not even water. We are even banned from talking to each other during work. We are nobodies. They don’t regard us. Staff morale is very low’ (Cleaner, Personal Testimony).

We urge the University to sign up officially as a Living Wage employer, committing itself to paying the Living Wage, as recalculated each November. 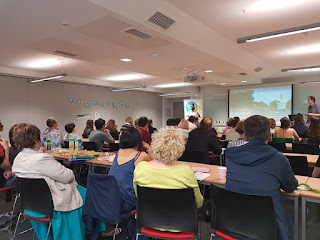 However, hardship is not only expressed in wages below the Living Wage at Nottingham University. It is also reflected in the highly precarious situation of casually employed teaching staff.

‘Working as a Teaching Associate is not easy. It means constant worry about paying rent, bills and living expenses. It involves endless stress about where the next short-term contract will come from’ (Casually employed Teacher, Personal Testimony).

The situation of many researchers on one fixed-term contract after another, never sure for how long they can rely on employment, is equally precarious. This includes the practice of so-called permanent contracts, which have however mentioned an end date linked to underlying funding.

‘The uncertainty of ‘permanent’ contracts that -in reality- are fixed-term contracts linked to end-of-funding is devastating. The lack of personal control is asphyxiating, it is unbearable. And now, what am I expected to do? Shall I make my research track record even more inconsistent? Shall I desperately jump to another ‘permanent’ contract and just wait for a better opportunity? Like a rat deserting a sinking ship? Like a rat. I have children and a mortgage and a contract ending after Christmas, but who cares?’ (Casual Researcher, Personal Testimony).

The campaign calls for the University to agree in formal, collective negotiations with the University and College Union improved working conditions for casually employed staff members and researchers on fixed-term contracts.