Don’t write Labour off just yet! The UK 2019 general elections

With a bit more than three weeks to go until the general elections on 12 December, the Labour Party trails the Conservatives in the polls. As two years ago, many election observers write off the party’s chances to form the next government. To what extent are these assessments based on developments on the ground?

In this blog post, I reflect on Labour's chances in the forthcoming elections based on my own campaign experience in Broxtowe.

In 2017, leading party politics experts and election observers agreed. The Conservatives were heading towards a clear majority with Labour struggling to hold on to many of its seats. The party itself started to believe these assessments pouring resources into holding seats, which had been deemed secure in the past.

However, against the background of my own canvassing experience at the time, these assessments felt completely wrong. On the ground, there had been a surge in activists pushing the party forward. In the end, Labour performed significantly better and the elections resulted in a hung parliament. Jeremy Corbyn ‘increased Labour’s share of the vote by more than any other of the party’s election leaders since 1945’ (Independent, 9 June 2017).

Of course, the situation now is not exactly the same as two years ago. The right-wing media has used the time since 2017 to vilify Corbyn in a constant barrage of attacks and smear campaigns. With many people focusing on Brexit, moreover, it is more difficult for Labour to stress its credentials about securing the NHS and combatting social inequality in society. Nevertheless, based on my own experience last week in the campaign in Broxtowe, the situation for Labour may not be as hopeless as observers suggest. 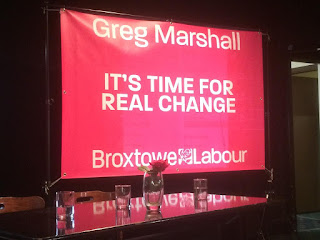 When the local Labour Party candidate Greg Marshall officially launched his campaign on Saturday, 9 November 350 supporters squeezed into the hall. One week later with Owen Jones addressing Labour activists, even 400 people came. Three canvassing rounds per day are supported by dozens of activists, many of whom are knocking at doors for the first time. A WhatsApp group of activist includes almost 250 people, who can be called up at short notice. Clearly, canvassing does not automatically translate into votes. Nevertheless, with three weeks of campaigning left and the main Labour policies still to be released, a lot remains possible; certainly within the marginal seat of Broxtowe, but equally across the country.

Whatever the election outcome on 12 December, one thing is clear. The Labour Party has transformed itself into a grassroots, activist based political party, in which the leadership listens carefully to what members are prepared to fight for. There is little left of the old, third way New Labour party of Tony Blair, when key decisions were taken within the London based party bureaucracy. Many capable, young, potential leaders are waiting in the wing, including Rebecca Long-Bailey, Angela Rayner or Laura Pidcock to mention just a few. There is a lot to be optimistic about for Labour Party supporters.