‘We shall strike, we shall fight, water is a human right!’ Defending public water in Ireland. 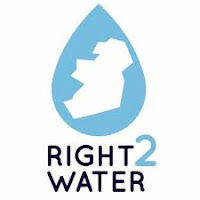 When the Irish government decided in 2013 first to establish the company Irish Water and then introduce water charges for users in order to comply with obligations of the Memorandum of Understanding with the EU over its bailout agreement, resistance erupted across the Republic. While resistance against austerity had been isolated and sporadic in Ireland until then, a large, national level movement emerged in 2014. Water had been the straw, which broke the camel’s neck. In this blog post, based on interviews conducted during field research in Ireland between 25 February and 2 March 2018, I will analyse the broad alliance underpinning this movement as well as the specific strategies employed.

A resistance movement is born

Water charges were highly controversial right from the beginning. People pointed out that they had already paid for them through general taxation and were not prepared to pay a second time. Moreover, the establishment of Irish Water as one big, overarching company raised the understandable prospect that water was over the medium-term to be privatised. After years of one austerity measure after the other, people were not prepared to accept this.

When Irish Water started to install water meters in 2014, an essential precondition to water charges, it was communities, which started the campaign by organising locally in opposition to the installation. In some areas, such as Crumlin, Dublin contractors had to leave after several weeks without having been able to install a single meter (Mac Cionnaith 2015: 81). Observing these developments, it was activists within the general trade union Unite and the retail union Mandate, who realised that water charges may finally be the issue, which would allow the formation of a broad-based, large-scale anti-austerity movement in Ireland. In a national level meeting with representatives from radical, left-wing parties including the Socialist Workers Party (SWP), also known as People Before Profit, and the Socialist Party (SP), now called Solidarity, the trade unions were put in charge of developing a broad campaign. Right2Water was born!

Preparations lasted from June to September 2014 with the first demonstration to take place on 11 October. The result of these efforts was overwhelming. ‘History will record that this was the day that Ireland roared. Over 100,000 burst on to the streets of Dublin that day, throwing off the shackles of compliance with austerity to reclaim their pride and reinforce in themselves, and others, that we could fight back, we could rise again, we could rock the establishment and we could win!’ (Ogle 2016: 66). In a country with about 4.8 million inhabitants, this is an enormous turnout. Overall, the movement was based on three pillars, the trade union pillar, including the Communication Workers’ Union, the civil service union CPSU and the plasterers’ union OPATSI in addition to Unite and Mandate, the political party pillar with Sinn Fein joining the SWP and the SP, and finally the community pillar bringing together the various local communities. Monthly meetings in Dublin were in charge of preparing the various demonstrations and co-ordinating overall strategy.

Blocking, marching and non-payment: the strategies of the movement.

The movement was organised around three key strategies: 1) the blocking of meter installations; 2) the organisation of large demonstrations centrally in Dublin, but also locally; and 3) a non-payment campaign of water charges. The blocking of the installation of water meters started off the campaign. It gave people something very concrete to focus their resistance on. Once this had started, more and more local communities followed and organised themselves. In several of these local communities, people consciously started to experiment in alternative forms of democracy including meetings without a leader, decision-making by consensus, etc. And while talk of ‘embryonic soviets’ may have been exaggerated, these experiments were a concrete expression of increasingly widespread dissatisfaction with representative democracy, which had sustained a self-serving elite in power. ‘For now what is being glimpsed, in many local meetings and housing estates across Ireland, is the possibility of a different kind of democracy from below, grounded in living practice and tackling the many hidden and not-so-hidden injuries of class as experienced in the Republic’ (Cox 2017: 198).

Second, the main agents behind large demonstrations were the trade unions and here especially Unite and Mandate. They had the finance and logistical experience to organise these events. Unlike in the past, demonstrations culminated in squares with a professional stage and proper sound system. Political speeches were mixed with performances by artists and musicians. The goal was, as one interviewee stated, that these marches were a fun day out for the whole family.

Finally, especially the political parties SWP and SP were behind the non-payment campaign. In their view, non-payment was an easy way for every Irish citizen to participate actively in the movement. When the alliance Right2Water declined to become transformed into a non-payment campaign, these parties set up their alternative, parallel ‘Non-payment network’.

Of course, there were tensions within the campaign. Communities and their grassroots, direct democracy organisation accused the trade unions of undemocratic, centralised decision-making. They were also suspicious of political parties, the actions of which were often interpreted as purely electioneering in the search for new members and more votes. This impression was at least partly shared by trade unions.

There was also disagreement over which of the strategies had been the most crucial one. Political parties felt it had been non-payment, while communities emphasised the blocking of meter installations. Trade unions, in turn, emphasised the importance of large marches. In the end, all three strategies were re-enforcing each other well. The blocking of meter installations prevented the successful implementation of charges right at the source. The non-payment campaign was very successful in that around 70 to 75 per cent of those subjected to water charges had not paid them (TheJournal.ie, 1 December 2016), making the running of Irish Water and thus potential privatisation unprofitable. And the marches, finally, gave people the confidence that they were not alone in their resistance, re-enforcing the blocking and non-payment strategies.

Victory and the way ahead

When the elections in 2016 ended without a clear government majority, the new minority government decided to suspend charges. Since November 2017, those who had paid have been reimbursed. There is some discussion of introducing charges for excess usage of 1.7 times the average water consumption, but with 40 per cent of homes still without a water meter (The Irish Times, 10 February 2018), it is difficult to see how this could be implemented. As one interviewee pointed out, activists know that every victory is only temporary and they may have to fight again, should there be an attempt to introduce charges through the backdoor. Overall, however, the Irish water campaign was a major success.

During the campaign, especially the trade unions underpinning Right2Water established in June 2015 the Right2Change campaign, focusing on individual candidates for the 2016 elections to sign up to its agenda for change including rights beyond water. Due to internal divisions within the campaign, however, this push for additional rights beyond water never fully took off. First, the Solidarity Party did not participate, as Right2Change refused to pledge not to participate in a governing coalition with centre-right parties. Second, the focus on elections in order to bring about change contradicted the emphasis within communities to experiment with alternative democratic forms as a result of general disillusionment with representative democracy.

As water activists have experienced elsewhere, while water is a particular issue which allows the mobilisation across the whole political spectrum, expanding into other areas of social justice such as public transport, education, housing or health is often difficult, if not impossible. In Dublin, some activists now focus on organising a campaign around the right to housing against the background of increasing homelessness and sky-high property prices with a National Protest – Housing is a Human Right scheduled for 7 April 2018. Although the campaign includes again trade unions and other social movements, observers question the viability of this approach. Housing affects people in very different ways, making it difficult to establish a broad-based, fairly homogenous movement.

Now in 2018 with the charges abolished the Right2Water campaign still exists but is hardly active, while local community organisations are no longer meeting regularly, if at all. And yet, we should not underestimate the seeds of resistance planted during the campaign. Having been politicised at a much higher level, Irish civil society may erupt in a new large-scale campaign again. Capitalist exploitation is always contested and Right2Water has demonstrated that resistance can be successful.