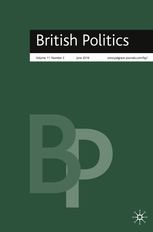 Drawing on his article 'The Labour governments 1974–1979: social democracy abandoned?’, recently published in the academic journal British Politics, in this guest post Max Crook questions the view that the Labour government in office from 1974 to 1979 started the transition to neo-liberalism in the UK. He, thus, challenges structural approaches to social democratic decline. In his focus on electoral politics, he makes two key claims: Firstly, Labour did not abandon the social democratic postwar consensus. Any fundamental challenge to it remained politically unthinkable. Secondly, the eventual collapse of the consensus was not the product of structural changes in the global economy, but was the highly contingent outcome of an electorally motivated gamble.

The questions of when and why the post-1945 social democratic era (or postwar consensus) came to an end has generated substantial debate. Many have portrayed the end of the social democratic era as the product of structural changes in the global economy that occurred in the 1970s, specifically the collapse of the Bretton Woods monetary system, the end of the ‘long boom’ (1945-1973), and the increased globalization of production. In Britain, a structural explanation appears to find strong support in the commonly accepted view that it was the Labour government (1974-1979) in the midst of economic crisis, and not the 1979-1997 Conservative governments that brought an end to the social democratic postwar consensus. This understanding is questionable.

When Labour returned to power in 1974, they inherited a large balance of payments and budget deficit, sharply increasing inflation, and for much of their first three years in office they faced runs on Sterling. The latter eventually led to the IMF loan of December 1976. Labour dealt with the economic problems it faced by pursuing reductions in public expenditure (both before and in return for the IMF loan) and taking advantage of their ‘special relationship’ with the trade unions to establish an incomes policy. These policies were generally successful at stabilizing the economic situation. In 1978 annual inflation was in single figures (it had reached 26.9 percent in August 1975), GDP growth was over 3 per cent, the current account was in surplus, the budget deficit as a percentage of GDP was close to half of what it had been, and unemployment was falling.

Many have argued that the overcoming of these economic difficulties (and the IMF loan) led the Labour government to abandon the postwar consensus. A brief look at Labour’s economic policy between 1977 and 1979 makes clear that this is greatly exaggerated. The key elements of the postwar consensus remained in place (usually seen as a combination of full employment, corporatism, the mixed economy, and an ever growing state). Despite substantial cuts to public expenditure the state was larger as a percentage of GDP in May 1979 than it had been when Labour initially came to power. Unemployment while higher than in previous decades was still only at 5.3 per cent in April 1979 (it reached twelve per cent in 1984). Mass unemployment remained politically unthinkable for the Labour government.  The government therefore engaged in deficit financed reflation in 1977 and 1978 to keep unemployment from rising, while using incomes policies to control inflation.

Other elements associated with the consensus remained untouched, the close relationship between the government and trade unions endured, and there was no move to privatize state owned industries. This also remained a highly egalitarian period, with the years 1977 and 1978 seeing British incomes before housing costs at their most equal in modern times. The lowering of income inequality was partially the result of the government’s incomes policies. As the above makes clear, the Britain of 1978 remained much closer to the Britain of 1968 than 1988.

The Labour party leadership, like that of any governing party, can be seen to be driven by a desire to maintain the unity of the party, demonstrate their governing competence, and show to the electorate that they have superior solutions to the key issues of the day such as inflation and industrial relations. With this in mind it is clear that the neo-liberal alternative eventually pursued by the Thatcher government, even in a much diluted form, would not have been politically desirable for the Labour government. Given the strength of the Labour left and the deep connection with the trade unions, liberalization was incompatible with party unity.

Nevertheless, it was not just unity that made it desirable for Labour to maintain the prevailing order and their close relationship to the trade unions. The government had relied on trade union co-operation with wage restraint to bringing down inflation from 26.9 per cent to single figures without mass unemployment and industrial unrest.  This cooperation had therefore become the primary basis for their claim to governing competence, and the foundation of their key electoral narrative. They had inherited industrial unrest and rising inflation, but had brought it under control through their consensual relationship with organized labour. They could therefore convincingly argue that unlike Labour the Conservatives would create a destructive and inflationary free-for-all, in place of consensual incomes polices, which had brought about industrial peace and falling inflation. In recognition of the political desirability of maintaining the prevailing order, the government hoped for West German style corporatism, not liberalization. This desire was outlined in cabinet meetings, and even their 1979 general election manifesto.

Social democratic continuity into the 1980s and beyond was neither politically nor economically unrealistic. By 1978 the economic crisis had been largely resolved, promoting the party’s recovering in the polls (the Labour party was ahead in some polls as late as December 1978). A perfectly plausible general election victory for Labour in 1978 or 1979 would have almost certainly led to continued attempts to establish corporatist arrangements, ruling out major liberalization.

Unfortunately for social democracy, Labour’s political recovery was shattered by the ‘winter of discontent’, which destroyed Labour’s reputation for governing competence and made the election of Thatcher largely inevitable. This was the result of a political strategy that failed, not an inevitable outcome of the economic crisis or Labour’s response to it. As mentioned above, Labour had been able to demonstrate its ability to govern competently and differentiate themselves from the Conservatives by using their unique relationship with the trade unions to pursue incomes policies that had brought inflation under control. This successful fight against inflation was seen as the government’s greatest electoral asset. To help win a 1978 or 1979 general election it was desirable for this asset to be secured by keeping inflation below single figures.

The government identified a 5 per cent target for wage increases for the fourth year of its incomes policy. This target would keep inflation in single figures (despite inflation running at around 8 per cent), and perhaps bring annual inflation as low as 5 per cent in time for the end of the government’s term in the autumn of 1979. Thus, the 5 per cent target for wage increases that eventually triggered the ‘winter of discontent’, the election of Thatcher and the fall of British social democracy, was driven by electoral objectives. It was an outcome that could have been avoided by minor changes in strategy, such as holding an election in the autumn of 1978, or putting forward a target of single figures for wage increases. If either of the above had been implemented, it is highly likely that Britain would be a very different place today.


Max Crook is a Visiting Lecturer in the Department of Political Science at Georgia State University. He received his PhD from the University of Nottingham/UK. His research focuses on the British Labour party and social democracy.
Posted by Andreas Bieler at 22:39