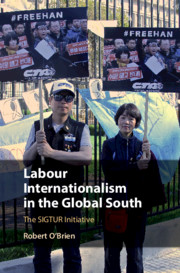 In his recently published monograph Labour Internationalism in the Global South: The SIGTUR Initiative (Cambridge University Press, 2019) Robert O’Brien has made a major contribution to our understanding of the possibilities for, but also obstacles to, transnational solidarity across borders in the 21st century. In this blog post, I will provide some reflections on this fascinating book.

Robert O’Brien makes two major contributions in this book. First, it is conceptually innovative due to his development of six different faces of labour internationalism. Second, drawing on these six faces, he then explores in detail the experiences of the Southern Initiative on Globalisation and Trade Union Rights (SIGTUR), a radically different attempt at transnational solidarity between labour movements of the Global South.

Thus, he discusses, for example, the impact of International Framework Agreements and the role of international labour organisations such as the International Trade Union Confederation (ITUC). Moreover, he highlights that it is not always material interests, which motivate workers to show solidarity. As an example of empathetic internationalism, O’Brien reflects on the motivation of workers from around the world to assist the Republican Government during the civil war in Spain in 1936 to 1939. ‘Structural conditions such as unemployment provided a push, the Communist Party provided the transport, but a sense of shared experience from immigrant histories and a commitment to universal struggles provided the motivation for particular individuals to leave their home, travel across an ocean and put their lives at risk in a bloody conflict’ (P.81).

The Southern Initiative on Globalisation and Trade Union Rights

SIGTUR was initially called the Indian Ocean Regional Trade Union Conference (IORTUC) at its first meeting in May 1991 in Perth, Australia, before it changed its name into the Southern Initiative on Globalization and Trade Union Rights (SIGTUR) in 1999. Key members over the years include the Congress of South African Trade Unions (COSATU), the Maritime Union of Australia (MUA), the Korean Confederation of Trade Unions (KCTU), the Centre of Indian Trade Unions (CITU), the Kilusang Mayo Uno (KMU) from the Philippines and later on the Central Unica dos Trabalhadores (CUT) from Brazil as well as the Central de Trabajadores de la Argentina (CTA).

From its inception, constituted as a network with a focus on radical action, SIGTUR has intended to provide a clear alternative to more bureaucratic international labour organisations such as the International Trade Union Confederation (ITUC). SIGTUR’s identity is not clear-cut. While Australia is, for example, located geographically in the Global South, the country is part of the group of industrialised countries. Hence, ‘rather than referring to a geographic area or a post-colonial tradition (both of which have some salience) “southern” captures an activist, independent, subaltern, and confrontational orientation towards capitalism’ (P.127).

Of course, member trade unions are rather different. For example, CITU reflects most closely the national prism of labour internationalism, while other SIGTUR members have emphasised aspects of the global prism. In general, however, O’Brien asserts that ‘over the period under study (1990-2018) we see a gradual erosion of the national prism as members’ economies become increasingly internationalized, global regulation becomes more intrusive, and cosmopolitan appeals have more resonance’ (P.118).

Importantly, despite a clear personal, emotional involvement, O’Brien does not assess SIGTUR through rose-tinted glasses. As he acknowledges, SIGTUR has not fully fulfilled the hopes of its founders. There is little reach into the membership bases of the various participating unions beyond the conference delegates. A lack of adequate funding has made it often difficult to maintain continuity between congresses and there have only been limited joint actions. The Futures Commission, a network of trade union researchers and labour academics established in 2013 and entrusted with the task to develop alternatives to neo-liberalism produced a first report Challenging Corporate Capital in 2015 (see also Proposals for Alternatives to Neo-liberalism), but there is hardly any ongoing integration into SIGTUR initiatives and a revival of its role is doubtful. Nevertheless, ‘SIGTUR has been able to begin this task [of developing international relationships of solidarity] by bringing together labour activists and engaging them in productive discussion. This has led to the first major accomplishment which is the education of a sector of the global labour movement’ (P.190).

There is one area I am slightly critical about this book. The six faces of internationalism separate out the material from the ideational and the state/regulatory level. While this works well for presentational purposes, we ultimately end up analysing only the external relations between these various factors. Hence, by overlooking or taking uncritically as starting-point this apparent separation between the economic and the political, the material and the ideational, the historical specificity of capitalism and the way exploitation is organised around wage labour and the private ownership or control of the means of production is overlooked. Inevitably, then, discussions about labour internationalism stay within the limits of capitalism, but cannot reflect on potential transformative steps beyond.

This criticism should not, however, diminish the huge importance of this volume. As O’Brien correctly observes, ‘if there is a worldwide struggle over the organization of production, consumption and distribution of resources, labour will play a central role’ (P.181). SIGTUR has clearly played its part in this struggle. Robert O’Brien, who has followed the development of SIGTUR closely, attended most of its Congresses, talked to the key union representatives and surveyed all the related documents, has done a major service to the international labour movement. The future of SIGTUR is currently unclear, but the lessons we can learn from this experiment stay with us, largely thanks to O’Brien’s scholarship.

And finally, the book is also testimony to the life achievement of SIGTUR's key founder Rob Lambert, who passed away earlier this year. As O’Brien points out, ‘from the early 1990s until 2010 the SIGTUR mobilizing structure revolved around a single person, its regional coordinator, Rob Lambert’ (P.165) (see also Lambert 2013). It was his vision of a new type of labour internationalism, which drove the project. It was his personal empathy, which allowed him to bring together labour representatives from vastly different cultural and ethnic backgrounds and overcome tensions and obstacles during the development of SIGTUR. In a way, this book is also the legacy of Rob Lambert’s work, who was in many respects ahead of his time, when it comes to labour internationalism.

This is a hugely important book, a must read for all those interested in driving further labour internationalism towards a fairer and more just future. I highly recommend it for reading!