Corbyn’s Campaign: The story of a remarkable summer. 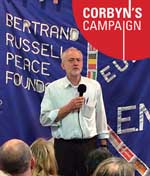 Only a few months after the Labour Party’s defeat in national elections in May 2015, the socialist, left-wing Jeremy Corbyn was elected as the party’s new leader carried by a wave of enthusiasm in- and outside the party. The book Corbyn’s Campaign (Spokesman, 2016) provides interesting insights in crucial aspects of this campaign and reflects on the possibilities for a socialist renewal in Britain today. In this blog post, I will report on the book launch with three of the authors, Tom Unterrainer, Adele Williams and Tony Simpson, which took place at the Five Leaves Bookshop in Nottingham on 27 January 2016.

Nottingham played a crucial part in this victory, as it was here on 28 June 2015 that Corbyn spoke at his first campaign rally. As he ‘later told the BBC’s Robert Peston, “we knew something was happening when a hundred people turned up on a Sunday lunchtime in Nottingham at 24 hours’ notice”’ (Corbyn’s Campaign, P.9).

In his contribution at the book launch, editor Tom Unterrainer argued that the ground for Corbyn’s victory had ultimately been prepared by the ongoing anti-war and anti-austerity campaigns across the country. It is the consolidation of this political movement, which had provided the basis for a successful campaign. Importantly, the idea behind the book is not only to analyse the campaign itself, but to address the tough question of what should come next in order to fulfil the promises of Corbyn’s victory and the hope of activists rallying around his campaign.

This situation now offers the opportunity to reflect on how to re-build the idea of socialism, understood as consisting of fairness and freedom, Unterrainer continued. Fairness in the workplace has clearly been lost in a situation, in which workers on zero hours are super exploited by companies such as Sports Direct, which names and shames individual workers for ‘not working hard enough’ and has them body searched after every shift (see Sports Direct, Stop your shameful work practices). Freedom at the work place, in turn, signifies the right of workers to determine themselves their ways of working. In other words, it is time to re-open the discussion about economic democracy at the work place and workers’ control.

Adele Williams, secretary of the Sherwood Labour Party, told the meeting how the campaign had energised existing party members to become active again as well as attracted a whole range of new activists to the party. As a result of the grassroots campaign’s support of Corbyn, it is now again possible to talk about politics in a different way, focusing on the day-to-day problems, which really matter to people.

Building on and strengthening further these deep foundations of the party is essential in the months and years ahead, Williams argued, to keep the political right inside the party at bay. Working groups on education, private rent and other related topics are being set up, as are local street meet-ups of the Labour Party in order to harness the power of party activists and help developing policies, which resonate with people and the wider public.


Tony Simpson, editor of the Spokesman, journal of the Bertrand Russell Peace Foundation, concluded the presentations by pointing out that the importance of the current wave of democratisation energising the Labour Party, had already been discussed by Ken Coates and his book Democracy in the Labour Party, written in 1977. Back then, as now, inner party democracy and workers’ control at the work place became topics for discussion.

Moreover, Simpson highlighted key moments of Corbyn’s internationalism. First, his assessment of the problems in Syria and how British policy has contributed to the ongoing war provides an important corrective to the official government position. Second, Corbyn’s clear and principled opposition to the renewal of Trident, the spending of vast sums of money on superfluous weapons, mark him out as a politician, keenly aware of the need to think about international relations in novel ways.

The meeting ended with a call by Unterrainer to continue building the movement for socialism. It is not enough to work for a new government and expect that it will carry out drastic changes on its own. Ultimately, transformation will depend on a mass movement supporting Corbyn’s policies for social justice, fairness and freedom.

This is clearly a significant book, covering most remarkable events. I strongly recommend it for reading to everyone interested in transforming Britain into a fairer and more just society.