Crisis in the Eurozone, Part I – the fundamental unevenness between core and periphery!

With their book Crisis in the Eurozone (Verso, 2012) Costas Lapavitsas and his colleagues have accomplished an impressive assessment of the underlying dynamics of the Eurozone crisis as well as provided an insightful analysis of potential ways forward. In this post, the first part of a two-part review of the book, I will focus on their discussions of the underlying dynamics.

In popular analyses, efficient German production is often contrasted with alleged financial imprudence, corruption and laziness in Europe’s periphery. Importantly, this volume does away with myths of cultural superiority of this type. It establishes clearly that we cannot analyse the German political economy and the peripheral political economies independently from each other. Rather, it is the uneven way of how they have become integrated into the political economy of the Eurozone, which is at the heart of the problem.

The institutional bias of the Eurozone

As Lapavitsas et al correctly note, the current problems of the Eurozone as well as the particular policy course of how to overcome it go right back to the establishment of Economic and Monetary Union (EMU) and the single currency as outlined in the Treaty of Maastricht in 1991. With states giving up their right to a sovereign monetary policy, now to be conducted by an independent European Central Bank (ECB), and their fiscal policy sovereignty severely constrained through the Stability and Growth Pact, the only way of regaining lost competitiveness in the Eurozone has been downward pressure on wages and work related conditions (PP.3-4). ‘The eurozone has directed the pressures of economic adjustment to the labour market: competitiveness in the internal market would depend on productivity growth and labour costs in each country, while labour mobility would be in practice relatively limited. As a result, a “race to the bottom” for wages and conditions has emerged in the eurozone benefiting large industrial capital’ (P.158).

Equally, the emphasis on austerity policies was entrenched by EMU. In order to be eligible to join the single currency, countries had to adjust to the so-called convergence criteria. Most importantly, they had to aim at national debt levels of no more than 60 per cent of GDP and budget deficits of no more than 3 per cent of GDP. In practice, this implied austerity programmes and cuts to public sector spending across the European Union (EU) already throughout the 1990s in the run up to the implementation of EMU in 1999.

As Lapavitsas and his co-authors make clear, the introduction of the single currency was not only intended to facilitate trade within the Internal Market of the EU. The main emphasis was also on establishing the Euro as world money. ‘The institutional and policy framework of the eurozone have not arisen merely due to ideological dominance of neo-liberal thinking within the EU. They have also been dictated by the need to sustain the euro in its role as world money within and outside the eurozone’ (P.29). As a result, peripheral countries had to join the euro at high exchange rates so that low inflation levels were ensured from the beginning, allowing the Euro in turn to compete internationally with the US Dollar. This implied pressure on the competitiveness of peripheral countries such as Greece and Portugal from the very beginning.

The eruption of the sovereign debt crisis

When the huge global financial services firm Lehman Brothers declared bankruptcy on 15 September 2008, it had become clear that the financial crisis had exceeded the worst expectations. What initially had started as a subprime mortgage crisis in the USA quickly spread through the global financial markets around the world. At great costs, states in industrialized countries including EU members shored up the private banking systems and injected money into the economy more generally to stem off recession. ‘The sudden rise of public debt across the eurozone in the last couple of years has been purely the result of the crisis of 2007-9’ (P.40). In turn, however, with liquid finance becoming scarce on the global financial markets, especially peripheral Eurozone countries have found it increasingly difficult to re-finance their debts. Ever higher interest rates had to be offered to the financial markets in order to sell the necessary state bonds.

As Crisis in the Eurozone, however, makes clear, the global financial crisis only triggered the sovereign debt crisis in Europe. The real cause of the crisis are the underlying imbalances in the European political economy between the core around Germany and the peripheral countries, exacerbated by the institutional bias of the Eurozone, outline above. The vast majority of German exports go to the EU and here Eurozone members, resulting in large account surpluses (see also The Imposition of Austerity). In order to re-invest these profits, they have ‘been recycled through foreign direct investment and German bank lending to peripheral countries and beyond’ (P.2). Peripheral countries, on the other hand, have been unable to compete with German productivity levels and ended up as countries with large account deficits. ‘Confronted with the stagnant and export-oriented performance of the dominant country of the eurozone, peripheral countries have adopted a variety of approaches. Thus, Spain and Ireland have had investment booms that were based heavily on real estate speculation and bubbles. Greece and Portugal, meanwhile, have relied on high consumption, driven by household debt’ (P.21). In the long run, such strategies based on capital inflows were unsustainable and it is this reality, which was brought to the fore by the global financial market crisis.

German workers as the victims of export success

It would, however, be wrong to conclude that German workers benefited from the export success (see also German workers and the Eurozone crisis). German productivity increases have not been the result of new technology and innovative working practices. Rather, they resulted from significant downward pressure on wages and working related conditions in line with the institutional bias of EMU. ‘Germany has been unrelenting in squeezing its own workers throughout this period. During the last two decades, the most powerful economy of the eurozone has produced the lowest increases in nominal labour costs, while its workers have systematically lost share of output. EMU has been an ordeal for German workers’ (P.4). In other words, Germany was more successful than other Eurozone countries in cutting back labour costs. ‘The euro is a “beggar-thy-neighbour” policy for Germany, on condition that it beggars its own workers first’ (P.30). 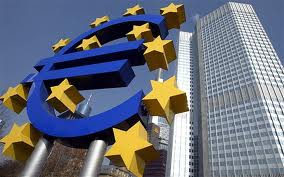 Who is being rescued? Banks, not people!

We are asked to believe that financial support packages for Greece and other peripheral countries are to help the country to avoid bankruptcies. In the end, however, it is not the Greek health service or the Greek education system, it is foreign banks heavily exposed to peripheral debt, which are the target. Especially French and German banks, having recycled super profits from export success, are in danger should peripheral countries default on their obligations. As Lapavitsas et al assert ‘although the rhetoric of European leaders was about saving the European Monetary Union by rescuing peripheral countries, the underlying aim was to deal with the parlous state of the banks of the core’(P.108).

This makes also clear that despite what the popular media want us to believe, the Eurozone crisis is not a crisis between Germany on the one hand, and peripheral countries on the other. Rather, it is capital, which has gained in strength vis-à-vis workers, who are made to pay for the crisis whether they find themselves in the core or periphery of the European political economy. This implies that we cannot only look at the structural dynamics underling the Eurozone crisis, but also need to focus on the agency behind first EMU, and then the current drive towards ever tougher austerity programmes in countries such as Greece. The establishment of EMU and the related institutionalisation of neo-liberal economics in Europe were from the very beginning in the interests of capital and here in particular transnational European capital, as it allowed employers to play off workers from one country against workers from another country. As the institutional bias of EMU put systematic downward pressure on wages across the Eurozone, trade unions were weakened and put on the defensive.

At the time, the vast majority of European trade unions were unhappy about EMU and its implications. Many attempted to resist its imposition, but were ultimately unsuccessful. Against the background of globalisation and the increasing transnationalisation of European production structures, capital had gained increasing structural power vis-à-vis trade unions, which were still predominantly organised at the national level (see Bieler 2006). Current austerity policies are simply a continuation of policies, which had always been part and parcel of EMU. Then and now, austerity policies ‘have aimed at protecting the interests of banks and bondholders by preventing default as well as protecting the interests of industrial capital by changing the balance of power against labour’ (P.181). It is ultimately the interests of capital, which are served at the expense of labour. The exploitation of workers in the core and periphery alike has been intensified as a result of the crisis.

Nevertheless, workers are not only victims. They have also weapons, with which to resist capital exploitation and to work towards an alternative way out of the crisis. The second part of the review of Crisis in the Eurozone will deal with this theme.