Karl Marx and the Dictatorship of the Proletariat!

The notion of the ‘dictatorship of the proletariat’ is widely vilified. Often linked to Stalin’s authoritarian rule in the Soviet Union, there is little positive said about it. Moreover, the negative evaluation is also regularly linked back to Lenin and his idea of a vanguard party taking over state power in order to change society for the better. As John Holloway argued, ‘you cannot build a society of non-power relations by conquering power. Once the logic of power is adopted, the struggle against power is already lost’ (Holloway 2002: 17). And yet, these reflections overlook Marx’s own discussion of what the dictatorship of the proletariat may entail in practice. Most importantly they neglect his analysis of the Paris Commune in The Civil War in France (1871). For as Engels pointed out in 1891, ‘well and good, gentlemen, do you want to know what this dictatorship looks like? Look at the Paris Commune. That was the Dictatorship of the Proletariat’.

In this post, I will look more closely at Marx’s discussion of the Paris Commune and his ideas about how to organise popular government.

It is especially the third part of the Third Address, given by Marx to the General Council of the International Workingmen’s Association in May 1871, which is relevant for our purpose here. First, Marx makes clear that the proletariat cannot simply take over the bourgeois state and its institutions, if it wants to change society. ‘The working class cannot simply lay hold of the ready-made state machinery, and wield it for its own purposes’ (P.34). Parallel to the ‘pace at which the progress of modern industry developed, widened, intensified the class antagonism between capital and labor, the state power assumed more and more the character of the national power of capital over labor, of a public force organized for social enslavement, of an engine of class despotism’ (P.35). In order to bring about a new society, therefore, the very institutions of the bourgeois state form have to be changed first. For example, ‘the police was at once stripped of its political attributes’ (P.37) in the Paris Commune. Furthermore, Marx recognised the importance of education for a truly free society and praised the Commune’s steps in this area. ‘The whole of the educational institutions were opened to the people gratuitously, and at the same time cleared of all interference of church and state’ (P.38).

Second, Marx highlights the governance structure, introduced by the Paris Commune. ‘The Commune was formed of the municipal councillors, chosen by universal suffrage in the various wards of the town, responsible and revocable at short terms’ (P.37). In other words, rather than representing authoritarian government, ‘the dictatorship of the proletariat’ is a fundamentally democratic set-up, within which the individual has a direct impact on decision-making in that delegates have the task to transfer local decisions and can be re-called and replaced at any time. Equally, in relation to the judiciary, ‘like the rest of public servants, magistrates and judges were to be elective, responsible, and revocable’ (P.38). The overall goal is the ‘self-government of the producers’ (P.38). This system, once established in Paris, should then also be implemented in the rural communities, with delegates being elected to represent these districts to the National Delegation in Paris. Again, each delegate was ‘to be at any time revocable and bound by the mandate imperative (formal instructions) of his constituents’ (P.39). In short, for Marx the dictatorship of the proletariat always implied direct participation by the people in all aspects of the decision-making process. It did not mean authoritarian rule.

Importantly, restructuring of the bourgeois state form did not simply focus on bourgeois institutions. For Marx, it was always clear that capitalist exploitation was rooted in the way production was organised around wage labour and the private ownership of the means of production. To overcome exploitation, therefore, it was necessary to abolish private property and this is precisely what the Paris Commune did. ‘Yes, gentlemen, the Commune intended to abolish that class property which makes the labor of the many the wealth of the few. It aimed at the expropriation of the expropriators. It wanted to make individual property a truth by transforming the means of production, land, and capital, now chiefly the means of enslaving and exploiting labor, into mere instruments of free and associated labor’ (PP.41-2). In other words, the economy cannot be regarded as separate from politics, if true change is to be accomplished. 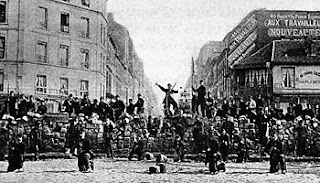 Finally, Marx was aware of the importance of the Commune’s international dimension. ‘If the Commune was thus the true representative of all the healthy elements of French society, and therefore the truly national government, it was, at the same time, as a working men’s government, as the bold champion of the emancipation of labor, emphatically international’ (P.45). Thus, for Marx it was always clear that the defeat of capitalism could not only be achieved in one country or even one city – after all the Paris Commune fell after a couple of months – but must always have an international aspiration.

To establish ‘the dictatorship of the proletariat’ as experimented by the Paris Commune is not really on today’s agenda. And yet, perhaps developments in Venezuela are potentially one step into this direction? The so-called Housing Mission, for example, did not only succeed in building thousands of homes for the poor, but also managed to include barrio residents in their planning and construction (Ellner 2012: 4). To conclude, the dictatorship of the proletariat, as envisaged by the Paris Commune, is an aspiration at best at this point in time, but an aspiration worthwhile to pursue and push further.