Crisis in the Eurozone, Part II – progressive ways out of the crisis!

Costas Lapavitsas and his colleagues show in their book Crisis in the Eurozone (Verso, 2012) that it is not German people, who have to pay for Greek excesses as a result of the sovereign debt crisis. Rather, it is workers in Germany and Greece alike, who are squeezed in order to continue the transfer of profits from workers to employers across the European Union (EU) (see Crisis in the Eurozone, Part I). In this second part of my review of the book, I will engage with the authors’ suggestion for a progressive way out of the crisis; a way, which empowers labour at the expense of capital.

Most of the attempts, we have seen so far, to solve the crisis adhere to a strategy of muddling through by continuing with neo-liberal policies. Most recently, the European Central Bank has indicated its aim to cut the borrowing costs of debt-burdened eurozone members through buying their bonds, while insisting at the same time that peripheral countries continue with their austerity budgets and labour market reforms (BBC, 6 September 2012). More radical proposals, on the other hand, do not follow through with all the related implications. For example, ‘eurobond proposals frequently fail to address the structural problems of competitiveness between core and periphery. If the monetary union is to become viable, core countries must willingly reduce their current account surpluses. Not only would transfers have to be made to peripheral countries, but national labour markets, social policy and tax systems would need to be harmonised among all participants. Resolving the crisis is not just a matter of devising ingenious methods of borrowing and effecting fiscal transfers, but one of radical political and social change across Europe’ (P.185). The EU as a whole seems to be unwilling to engage in radical change of this type. Hence, what is left are possibilities of a creditor-led default or a debtor-led default in the eyes of the authors.

This solution, organised by the creditors, would involve some debt cancellation, but it would be closely controlled and with the interests of the creditors at heart. As Lapavitsas et al argue, ‘it would mean, at best, a mild “haircut” for lenders accompanied by a lengthening of maturities and possibly lower interest rates. The banks that organised such a restructuring could expect to earn substantial fees’ (P.129). Such a way forward would still include a continuation of austerity policies and it is highly likely that creditors would demand control over key state assets by pushing for privatisation. Additionally, it is likely that the EU and creditors would demand even closer control over Greek public finances than they have already obtained. ‘At the very least, it can be expected that there would be a measure of direct control over Greek public finances by EU officials. In addition there would probably be pressure to privatise public assets on an extensive scale to repay official debts’ (P.221). Greek sovereignty would, thus, be compromised and an independent way out of the crisis impossible (see also The imposition of austerity and the move to authoritarian government). Equally, this strategy would continue to squeeze workers to ensure that Greece can continue to service its debts with foreign banks.

It is a debtor-led default, inevitably combined with a progressive exit from the Euro, which is Lapavitsas et al’s suggestion for a progressive way out of the crisis. Key policies of this strategy would include: (1) a unilateral suspension of payments; (2) a public audit of debt following suspension of payments to identify which part of national debt is actually legitimate; (3) a deep ‘haircut’ for lenders (PP.130-1) and (4) an expansion of the tax base to include the rich and capital more generally (P.135). To avoid an immediate crisis of the financial system, ‘there would have to be extensive and decisive government intervention. In Greece this would certainly mean extending public ownership and control over banks, thus protecting the banks from collapse and preventing depositor runs. Under public ownership, the banks could act as levers for root and branch transformation of the economy in favour of labour’ (P.132). Thus, the authors recognise correctly that a change in the way the capitalist social relations of production are organised is necessary. Exploitation is rooted in the way capitalist production is organised around wage labour and the private ownership of the means of production. Nationalisation programmes would at least partly challenge this dynamic. Moreover, such a programme of nationalisation would help to shift the balance of power in society away from capital and towards labour.

Additionally, Lapavitsas and his colleagues acknowledge that a progressive alternative cannot simply be carried out within the existing state institutions. There is no point in just changing the government and then work from within the apparatus. ‘There could be no permanent resolution to public finance problems in Greece, or other peripheral countries, unless there was a change in the nature of the state, reflecting an underlying shift in the balance of class forces. More broadly, there could be no rebalancing of the economy in favour of working people without a profound restructuring of the state’ (P.135). This echoes Marx’s own analysis of the Paris Commune in 1871 and his appreciation of its transformation of bourgeois state institutions to ensure that working people’s interests are at the heart of state policy-making (see Karl Marx and the Dictatorship of the Proletariat). 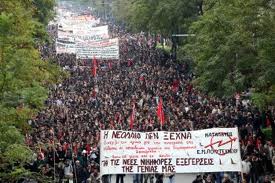 Of course, the authors realise that a debtor-led default/progressive exit strategy would not be without its problems. Exit from the Euro would imply an immediate devaluation of the new Greek currency and while this would improve the country’s export competitiveness, imports would also drastically increase in price and put pressure on household consumption. Nevertheless, they are confident that ‘if debtor-led default and exit were accompanied by an appropriate programme, they could deliver better growth outcomes with greater equality, while also strengthening the position of labour in society’ (P.223).

The strategy of leaving the Euro is contested within left-wing circles. Michel Husson, for example, argues that ‘to suggest that the manipulation of exchange rates may be sufficient to ensure competitiveness is an illusion, and, by the way, a central postulate of the “Pact for the Euro”’ (Husson 2011: 302). Instead, the focus should be on a re-foundation of Europe, which is based on a rupture with the neo-liberal EU. In other words, rather than looking for dramatic change at the national level, the EU as a whole should be reconfigured. In this respect, Husson identifies ‘three essential ingredients for a radical Left response to the crisis: (1) a radical change in the distribution of income; (2) a massive reduction of working time; and (3) a rupture with the capitalist world order, starting with “really existing” Europe’ (Husson 2011: 306). His suggestions include many measures put forward by Lapavitsas et al including resistance against austerity and cuts, support for a radically progressive redistributive tax system and capital controls, the nationalisation and democratic control of banks, as well as a debt audit under democratic control followed by default. The key difference is, however, the level at which to achieve this change. While Lapavitsas et al argue that Greece cannot wait for Europe as a whole to act, Husson maintains that radical change is only possible at the European level.

Whichever way forward is sought, there is no doubt in the minds of Lapavitsas and his collaborators that class struggle is the decisive factor in the Eurozone crisis. ‘The choice belongs to society and, as always, depends on struggle’ (P.73). German workers, equally oppressed by the current system, could thereby become allies of workers in peripheral countries. In sum, ‘the path of the adjustment would therefore depend on social and political struggle that would involve both Greece and the EU’ (P.224). A victorious outcome of this struggle ultimately depends on a change in the balance of power in society. Welfare states and fairer societies were based on the capacity of labour to balance the class power of capital (see also The Rise and Fall of the Welfare State). As Lapavitsas noted elsewhere, ‘a radical left strategy should offer a resolution of the crisis that alters the balance of social forces in favour of labour and pushes Europe in a socialist direction. This would be impossible without challenging the class and imperial relations at the heart of the eurozone …’ (Lapavitsas 2011: 294). To conclude, there may be disagreement over the level of action, but there is consensus that ‘Another Europe Is Necessary’.

Lapavitsas, Costas (2011) ‘Default and Exit from the Eurozone: A radical left strategy’, in Leo Panitch, Greg Albo and Vivek Chibber (eds) Socialist Register 2012: The Crisis and the Left. Pontypool: The Merlin Press. PP.288-97.