A socialist alternative through the Labour Party? Reflections on transformative politics.

On Tuesday, 25 September 2012, I attended a local Labour Party meeting in Beeston, Nottingham/UK. Invited guest speakers were the left-wing Labour MP and Chair of the Labour Representation Committee (LRC) John McDonnell and the General Secretary of the Commercial Workers’ Union (CWU) Billy Hayes. There was a clear agreement on the need to replace the current ConDem government. There was less agreement on how to ensure that a renewed Labour government would actually stand up for working people this time round.

In this post, I will critically assess both speakers’ suggestions by drawing on the work of Karl Marx and Nicos Poulantzas.

John McDonnell’s attack on the current government was well received by a large audience of local activists related to the party, but also the labour movement more broadly. Considering that income tax has been cut for the highest earners, while the welfare state is being systematically dismantled through privatising initiatives in education and the health service, it is clear that the Conservative Party is conducting class warfare. Everybody agreed that bringing down the current government has to be the first priority. 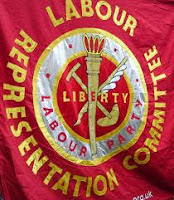 Refreshingly, John McDonnell did not shy away from admitting that many seeds for the current destructive policies had been sown under the previous New Labour governments. Private Finance Initiatives (PFIs), tuition fees in Higher Education, general restructuring in the public sector had all been introduced by New Labour. Current policy is simply extending these policies into new dimensions. Hence, the second important task, John McDonnell argued, is to recreate the Labour Party with a strong activist base and the needs of working people at its heart. Policies of the next Labour government should include proper taxation of the rich and large corporations, an end to privatisations and PFIs, abolition of tuition fees, control of the financial system and re-nationalisation of the railway industry. Trident should be scrapped and Labour re-established as the party of peace (see also Labour needs to give people hope). Such a development, John McDonnell argued, would require determination, courage to stand up for one’s principles as well as solidarity based on collective action.

Billy Hayes echoed these sentiments. Waiting for the next Labour government would not be enough. Trade unions are not just spectators. They have a crucial role to play in ‘assisting’ the Labour Party to return to its origins. There should be a focus on a wage-led recovery and the financial system should be nationalised. Emphasising the need to build affordable houses could re-connect working people with the party. 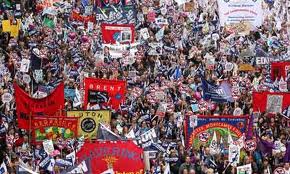 In the ensuing discussion, speakers queried to what extent a change of the Labour Party itself would be possible, considering the current front bench around Ed Miliband and Ed Balls and their endorsement, for example, of a public sector pay freeze. Many pointed out, however, that within the existing political landscape, the Labour Party was the only party with a realistic change to replace the ConDem government. It would be time to set aside internal differences and concentrate on defeating the Tories.

Nevertheless, even if it was possible to change the Labour Party back into a party representing the interests of working people, what would the other necessary conditions be in order to ensure a successful transformative, socialist strategy, as advocated by the speakers? In his assessment of the Paris Commune, Karl Marx identified two conditions for successful transformation (see Karl Marx and the Dictatorship of the Proletariat). First, he highlighted the need to abolish private property. Marx recognised that it was the way of how capitalist production was organised around private ownership of the means of production and wage labour, which ensured the accumulation of profit. In capitalism, nobody is forced to work for someone. Nevertheless, if one does not own the means of production, then one is indirectly forced to sell one’s labour power in order to ensure survival. Only the socialization of the ownership of the means of production can, therefore, overcome exploitation. Second, Marx identified the need to transform the capitalist state form. ‘The working class cannot simply lay hold of the ready-made state machinery, and wield it for its own purposes’ (Marx 1871: 34). The machinery itself requires transformation. Importantly, in the Paris Commune representatives were replaced by delegates, who had the task to relate local decisions and can be recalled and replaced by voters at any time, ensuring much more direct participation of people in decision-making.

Relating these two preconditions to the speakers’ suggestions, it is noticeable that both made a reference to the need of changing the social relations of production with their call for nationalizing the railway industry and financial system. Nationalisation of key industries would imply a change in the capitalist production structure and, therefore, also potentially allow us to go beyond capitalist exploitation. At the same time, however, the warning by Nicos Poulantzas needs to be kept in mind that ‘in the framework of the capitalist State, nationalizations (as distinct from socializations) do not intrinsically deprive the bourgeoisie of economic ownership of public capital’ (Poulantzas 1978: 193). After World War Two many key industries were nationalised in industrialised countries such as coal and steel in the UK. Telecommunications, water and other utilities were generally in public hands. Nevertheless, the state was still a capitalist state, with capital ultimately determining the direction of industry. Of course, the Keynesian welfare state offered working people much more than the current neo-liberal state form. This was the time when the National Health Service was established in the UK, for example, and when large-scale social housing projects were carried out. Nevertheless, it was also a unique situation. On the basis of the need for large-scale reconstruction after the destructions of the war, the related need for workers and thus full employment, as well as against the background of the Cold War and regime competition with the East, workers could balance the power of capital and force employers into making concessions (see The Rise and Fall of the Welfare State). What these concessions, however, did not imply was a systematic change in the capitalist social relations of production. Unsurprisingly, when capital went on the attack against welfare states from the late 1970s onwards, labour movements were often unable to defend the achievements. In short, socialization of production, not nationalization is required for real change. ‘By transferring the means of production from the possession and economic ownership of capital to the real control of the workers, socialization entails not only a change in state power, but also substantial modifications in the relations of production and the state apparatus’ (Poulantzas 1978: 175). Neither John McDonnell nor Billy Hayes went beyond a call for nationalizations.

What was even less clear in the two speeches is how the restructured Labour Party would relate to the state. The capitalist state form was not questioned. Rather, there was an assumption that it would simply be enough to regain power through the ballot box and then change policies. As Poulantzas, however, similar to Marx, noted, ‘the popular classes cannot hold such power within the State because of the unity of the state power of the dominant classes, who shift the centre of real power from one apparatus to another as soon as the relationship of forces within any given one seems to be swinging to the side of the popular masses’ (Poulantzas 1978: 143). There can simply be no transformative change as long as the capitalist state form remains the same. ‘In the absence of such transformation, we can be sure that the new personnel will end up, or even begin, by rising to the heights of its functions and reproducing the practices that flow from the structure of the State’ (Poulantzas 1978:157). Forms of direct, rank-and-file democracy, direct intervention by the popular masses in the State were in Poulantzas’ eyes crucial for the transformation of the state. Neither of the two speakers made comments in this area.

No doubt, this was an exciting evening with John McDonnell’s and Billy Hayes’ commitment to social justice clearly visible. The strategy of how to bring about real transformation, however, still needs to be developed further and include considerations of socializing industries and transforming the capitalist state form.