October 20 – British trade unions and the struggle against austerity

According to the Trades Union Congress (TUC), more than 150000 people participated in the march against austerity and For a Future that Works in London on Saturday, 20 October 2012. Affiliated unions up and down the country had mobilised, members from Unison, the national teachers union NASUWT, the National Union of Teachers (NUT), the Communication Workers’ Union (CWU), the University and College Union (UCU) and others were clearly visible. The march was colourful, the mood buoyant, the chanting intensive. Protesters were furious about the cuts to education, privatisation of the NHS and large-scale restructuring in the public sector. They signalled their willingness to resist. There was a feeling of empowerment, of a possibility to go beyond the current ConDem government. And yet, is such an optimistic assessment warranted?

In this post, I will shed a critical light on British trade unions’ strategy against the austerity budgets of the current ConDem government.

A march of 150000 people is at first sight clearly a success. However, is this a correct evaluation when looking at the general development over the recent 18 months or so? This was not the first time that the TUC had called for a march against austerity. Already on 26 March 2011, people had gathered in London to register their opposition to welfare cuts (see Large demonstration against ConDem cuts). At that time, however, there were around 250000 people, clearly more than last Saturday (BBC News, 20 October 2012). Compared with the march on 20 October, back in March 2011 there was a genuine sense of a demonstration by society at large. Families with their children, members of the public not necessarily closely involved with the labour movement considered it important to be present. The difference could not have been bigger this time round. The core of the demonstrators was made up of trade union activists. Yes, unions had been successful at mobilising, but they mainly reached their own activists, people who would anyway support their agenda and come out if called upon. The wider population was hardly involved.

The assessment is even more damming in view of the public sector strike on 30 November 2011, when 30 trade unions had successfully co-ordinated strike action across the country over the government attack on pensions (see November 30). Many more demonstrations had taken place across the country on that day. When the demonstration in Nottingham reached the city centre, many bystanders showed their support through clapping, quite a few of them joined the march. There was a genuine feeling of a new beginning, in which broader society would be involved. Compared to these developments in 2011, the evaluation of the demonstration on 20 October has to be much more pessimistic. The smaller numbers on the march, which are not substantially improved by the 5000 people marching in Glasgow (BBC News, 20 October 2012) and the 1000 people on the streets in Belfast (BBC News, 20 October 2012), clearly indicate that the impetus of 30 November 2011 has evaporated. Why has this happened?

The public sector strike and the related demonstrations on 30 November were a clear success. However, trade unions failed to see it as a starting-point for a more sustained strategy against austerity. Instead of setting a further date for co-ordinated strike action, instead of planning further marches against austerity linked to 30 November, several of the health, civil service and teaching unions reached an agreement with government in December 2011, while others such as the Public and Commercial Services Union (PCS) walked out of negotiations and continued to threaten strike action (BBC News, 19 December 2011). The trade union front was split, some still talked about joint strike action, but it all came to nothing in the end. A clear opportunity had been wasted by a short-sighted focus on minor gains in the immediate future. Unsurprisingly, what followed was a demobilisation of union members and wider society up and down the country.

UCU – the art of demobilisation

My own trade union, the University and College Union (UCU), provides an excellent example of how this demobilisation was carried out. As a result of the improved government offer on pensions to public sector unions, USS, the University pension fund, too had to demonstrate its willingness to improve the pension scheme for Higher Education (HE). At a special HE sector conference in London in January 2012, a majority of delegates supported the motion by the union leadership that action was to be suspended to enter discussions, which had been offered by employers. Only few concessions had been made and the employers had not even talked about negotiations. Nonetheless, the UCU leadership felt that suspending action was the way forward. It had always been reluctant to co-ordinate strike action. USS would not be a public sector pension scheme and therefore joint strike action would put no pressure on employers in HE, it was argued. Rather than seeing the struggle against pension cuts as a more general struggle for proper pensions for all, as a more general struggle against austerity, there had always been a dominant view, which evaluated cuts to USS in a rather narrow, HE specific way. Nevertheless, there was a short moment in June 2012, when a more progressive, a more forward strategy seemed to be possible. The national leadership was completely taken by surprise, when a majority at the UCU annual congress in Manchester voted against the recommendation of the UCU negotiators to continue with talks and to continue with the suspension of industrial action. A majority of congress delegates agreed that too little had been achieved to warrant such a passive course of action. Industrial action was to be reinstated with immediate effect and a period of industrial conflict for the autumn to be prepared over the summer. 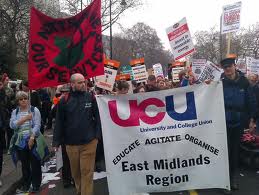 Who expected the national leadership to be active over the summer and mobilise members was soon disappointed. Local associations were contacted and asked to put in place proposals for action, but little else. When it came to the crucial HE sector conference in September 2012, the national leadership circulated a motion to members, which argued that only an all-out strike could be a successful way forward. Instead of thinking in imaginative ways about how action could focus on negative publicity for employers, potentially highly effective at a moment, when universities feel under particular public scrutiny due to the first cohort of students paying £9000 tuition fees arriving on campuses, a strategy going back to the 1970s was put forward. It is doubtful that the national leadership ever wanted that motion to succeed. Rather the objective was to scare members off, to dissuade them from industrial action. They succeeded in that. From the very beginning, it was clear at the conference in September that a majority had assembled in favour of suspending again industrial action. The right within UCU had successfully mobilised to avoid another surprise defeat, as it had happened at the annual congress in June.

Nevertheless, while successful on the day, what the strategy also implied was a complete demobilisation of members more generally. Shortly after the decision to suspend action over USS, the union held a ballot on industrial action over pay. While a majority of members endorsed action short of strike, a majority rejected any further strike action. The ballot was lost. Of course, pensions and pay are two different issues, but members were unsurprisingly confused that their leaders had first suspended industrial action and then shortly afterwards issued a new ballot to endorse action. In the end, a decision was taken not to engage in industrial action over pay this autumn. Overall, at the moment of the most severe attack on Higher and Further Education, the union is at its weakest. The signal to employers is clear, you can impose whatever cuts to pensions and pay you want, UCU will not mobilise for action.

What next for a progressive labour strategy?

It is this kind of strategy, an unwillingness to see the wider picture of restructuring and act accordingly together with other trade unions, which has put the labour movement on the back foot and is ultimately responsible for the disappointing turnout on 20 October. At the TUC congress in September 2012, there were calls for a general strike (BBC News, 12 September 2012). Interviewed on 20 October, however, the former general secretary of the TUC, Brendan Barber, indicated that this had been yet again empty talk. ‘He said he did not think a general strike by unions was likely, adding: "Some of my colleagues may talk about that. I don't hear too many people calling for a general strike"’ (BBC News, 20 October 2012). The union leadership has let its members, working people and wider public down. All what is on offer now is the hope for a return to power by New Labour at the next elections. Considering how many of the current ConDem restructuring measures had actually been initiated by New Labour in the first place, this is not a very encouraging prospect. In sum, the trade union centred approach on resisting austerity has failed. October 20 has demonstrated this. As one of the participants pointed out, the march was mainly a trade union ritual, an effort to be seen to be doing something. It was not part of a wider strategy of resistance against austerity.

What potential ways forward can be identified? In my view, mobilisation has to start again from below with trade union activists attempting to forge broader alliances through concrete campaigns with other social movements. One example in this area is the current local campaign in Broxtowe, an area in Nottingham, to save the NHS (Broxtowe – Save our NHS). Another example is the European-wide campaign for the right to water and against the privatisation of water provision, in which the European Federation of Public Service Unions (EPSU) co-operates closely with other social movements across Europe (Water is a Human Right). It is this kind of broader campaigns with a focus on issues beyond the workplace, which may provide a new impetus forward. The alternative would be an exclusive emphasis by trade unions on how to service the interests of their individual members best. The national leadership within UCU, for example, seems to favour such a strategy. Renouncing, however, a role in wider societal debates would only imply further irrelevance of organised labour, a situation which must be avoided at all cost.