The Dance of the Undead - Not only at Marikana, Not only in South Africa ...

Starting from the recent massacre of striking South African workers at the Marikana mine (The Guardian, 7 September 2012), in this guest post Peter Waterman looks more closely at current trade union policy-making in view of the global crisis of capitalist civilisation. The massacre does not only indicate that the hopes for post-apartheid South Africa have not materialised. It also highlights the intensity of the capitalist crisis. What are the key requirements for an emancipatory movement towards another South Africa, towards another world?   ﻿

'The term undead describes beings in mythology, legend or fiction that are deceased yet behave as if alive. A common example is a corpse re-animated by supernatural forces by the application of the deceased's own life force or that of another being (such as a demon). Undead may be incorporeal like ghosts, or corporeal like vampires and zombies.' (Wikipedia) 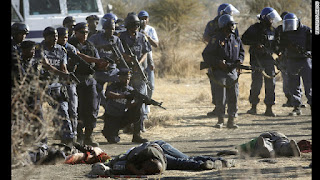 The Three-Party Alliance – and the MEC makes Four

The South African state is governed by a tripartite alliance of three 20th century (or earlier) movements with emancipatory claims, projecting each its own utopia:

1. The African National Congress promising a utopia of national citizens (‘the people shall govern’);

3. A Communist Party promising ‘to end the system of capitalist exploitation and establish a socialist republic based on the common ownership of the means of production).

But there is a very real fourth party to the alliance. This is the Minerals, Energy (and Financial) Complex (MEC), the one that has best survived and most benefited from the end of Apartheid. And whilst invisible in the Tripartite Alliance, and the Constitution, its vampire role has been dramatically revealed by the Marikana Massacre. Most recently I learned that a Black MEC member has not only previously funded Cosatu but was the major funder of the Cosatu Congress that was confronted by Marikana! AFRICAN Rainbow Minerals (ARM), owned by businessman Patrice Motsepe, is the largest private donor to Cosatu, having contributed R1.75 million to the trade union federation over the past three years [...] This does not include ARM's donation to this year's congress, where Motsepe was again the biggest donor' (see  http://www.peherald.com/news/article/8607).

Now, when an irresistible force meets an immovable object, something’s got to give. In this case the force has been 21st century capitalism, a modern beast of the apocalypse (to continue in metaphorical style). And the immovable objects in the Tripartite Alliance have revealed themselves as at least extremely mutable.

The nature, process and outcome of the transition from Apartheid have been well identified by critical writers in South Africa, in such phrases as ‘Elite Transition’ (Patrick Bond) ‘Lost in Transformation’ (Sampie Terreblanche on the MEC), ‘Coup by the Connected and Corrupt’ (Mark Heywood on the undermining of the Constitution), ‘Gaining Influence, Losing Power’ (Sakhela Buhlungu on Cosatu), ‘The end of the anti-apartheid democratic labour movement’ (Khanya Journal on Cosatu), ‘A Vanguard of ANC Factionalism’ (Dale McKinley on the SACP). For all of these and a multiplicity of other voices, check the frequent compilations on Marikana posted on the invaluable South African Debate List.

Not only in South Africa

The present crisis of capitalist civilisation may be sharper and more dramatic in South Africa than elsewhere. This is due to the equally dramatic replacement of the Apartheid state by a liberal-democratic/social-liberal one. And to the relative novelty, fragility and contradictions within and between the three parties named. The result? Political democracy and social fascism indeed!

However, the crisis striking the three identified parties is not unique to South Africa:

• In the South, consider the case of Brazil, where the working-class composition of the Workers Party was transformed into one of the rising middle class. The CUT (trade union) and Worker Party President, Lula da Silva, has combined significant redistribution (Bolsa Familia) to the poorest of the poor with neo-liberal economic policies. But the income differentials continue to rival those of South Africa. And meanwhile we witness the Rise and Decline of Brazil’s New Unionism (Jeffrey Sluyter-Beltrao 2010).

• In the East – the Communist homeland - we witness either, 1) the seriously illiberal democracy of a Russia in which the former state-controlled unions are hamstrung by their devotion to tripartism and crippled by privatisation and deindustrialisation, and where power rests with ex-KGB apparatchiki (Soviet origin of the machista Prime/ President), favoured oligarchs and a state-subservient church, or 2) The self-transformation of the Chinese Communist party and state into a corrupt authoritarian industrialising capitalist regime, presiding over state-subordinated trade unions – whilst labour and popular protest movements rival those of South Africa.

• In Western Europe we have seen the collapse of mass Communist and Social-Democratic parties, the crisis of trade unions wedded to social-partnership and the capitalist welfare state, crippled by privatisation, precarisation, anti-labour legislation, and outsourcing. Whilst most-clearly evident in semi-peripheral Greece and Spain, the poverty and anti-labour legislation in these countries is leaking upstream to the social-reformist heartland.

Is another South Africa (and world) possible?

The undead do not die. These corpses can, we now know, ‘be re-animated by supernatural forces, by the application of the deceased's own life force’. This supernatural is, in South Africa, actually social - the inertial force of what exists over what is yet to be born.

What is, however, surely demonstrated by the dance of the undead in South Africa is the necessity for another emancipatory movement, with another kind of utopia. Confronted with dystopia, we are condemned to being utopian (Sousa Santos again).

This means the re-imagination of emancipation, this time without the illusion that capitalism, state-ism, industrialism, modernisation, developmentalism, represent or allow for human flourishing, for a reinvention of Ubuntu, i.e. the notion that I am who I am because of other people, for rights granted also to Pachamama (Mother Earth in the Andes), of emancipation as the overcoming of all forms of alienation (the destruction of previous rights and powers, the denial of present capacities and future human possibilities).

Invisible or emergent in South Africa well before Marikana (as elsewhere) are social protests, movements, networks, writings that propose such elements of human emancipation as

• the democratisation of democracy (recognising this as something that must spread and deepen or shrivel and die),

• the protection and expansion of the commons,

• useful (as distinguished from ‘decent’) work, requiring the surpassing of wage-slavery,

• the active acceptance (not passive tolerance) of sexual minorities,

• an equal dialogue of civilisations instead of a war of Gatling gun wielders against the Others,

• global solidarity movements owned by those addressed (not their jet-setting leaders),

• the real - rather than token, commoditised or fetishised - emancipation of women,

• the emancipation of cyberspace,

The undead do not commit suicide. They have not only their own ‘life force’ but their own – conservative or reactionary – utopias.

Within the left and labour movements of South Africa (and elsewhere) this utopia is a backward-looking one, the explicit or implicit reference of which is a 1970s Sweden (idealised). This uncriticised utopia is universalised and projected onto the world stage. It is here best represented by that Mecca of ‘social partnership’, the International Labour Organisation (another Tripartite Alliance, in which the self-subordination of unionised labour is signified by the century-old 75% voting power of state and capital). The dream, however, of a Global Neo-Keynesianism does not take account of 1) why it has run into the ground in its North-West European homeland nor, 2) whether it could possibly be hoisted to the global level, nor 3) of the self- and us-destructive nature of capitalism, whether Keynesian or Friedmanite. 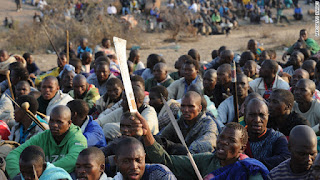 Is another emancipatory movement possible?

An emancipatory understanding of social transformation is to be contrasted with that of at least the SACP and the ANC, whose complicity with the Soviet invasion of its Communist ally, Czechoslovakia, 1968, was at least implicitly justified by the prioritisation of national liberation over and against solidarity with workers and peoples subject to Soviet imperialism. Cosatu and its predecessor, Fosatu, having been born after (and actually despite) ANC-SACP domination of the anti-apartheid movement in general and the union movement in particular, supported the Polish workers against the Communist-Military Dictatorship of Jaruzelski, and, more recently, has taken dramatic action against Chinese Communist arms shipments to the authoritarian regime of Mugabe in Zimbabwe. Cosatu has also shown itself willing to openly debate its international relations. The possibility therefore still exists of Cosatu breaking out of the iron cage of traditional union elite inter-nationalism and contributing to a new kind of global solidarity unionism (Waterman 2012).

This paper is abbreviated from a version amongst these Marikana Reports, in which the references above can be found.

Peter Waterman (London 1936) has been involved with and/or writing about social movements, internationalisms and (cyber-)communcation for several decades. He was identified with the new union movement and labour studies in South Africa from 1973 and has been there three times since 1994. He is currently co-editing a special issue of the open-access on-line journal, Interface, on New Worker Movements. He has a blog on UnionBook.
Posted by Andreas Bieler at 16:00