How The West Came To Rule – Celebrating the 10th anniversary of the Marxism Reading Group at Nottingham!

This semester, the Marxism Reading Group of the Centre for the Study of Social andGlobal Justice (CSSGJ) in the School of Politics and IR at Nottingham University will celebrate its 10th anniversary. In this blog post, I will briefly outline the main purpose and achievements of the group over the years. Moreover, I will provide information about our anniversary workshop on How The West Came To Rule, on 7 June 2016.

To mark the 10th anniversary of the Marxism Reading Group, an ‘Authors meet Critics’ Workshop on the recent book HowThe West Came To Rule by Alexander Anievas and Kerem Nişancioğlu (Pluto Press, 2015) will take place at Nottingham University on 7 June, 2 to 5 p.m. The two authors will introduce the main argument of their book, followed by four current members of the reading group providing critical interventions and reflections. The authors will then have the chance to reply, before the discussion is opened up to the floor. 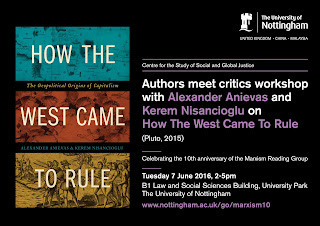 Attending the workshop is free of charge. Everyone from within academia and the wider public is welcome!

At times, when it has become increasingly difficult to engage in academic activities, which do not directly result in research grant applications and/or publications, the Marxism Reading Group has provided an environment characterised by a flat hierarchy, providing everybody with space to make their voice heard on an equal basis. Consisting of Ph.D. students and staff members associated with CSSGJ, the emphasis of the group has been on reading and discussing collectively key Marxist texts, classics and modern. In turn, this has helped members to develop further their own thinking on contemporary change and was, thus, translated back into various individual research projects.

Since 2006, over 30 books have been read including Karl Marx, Capital: A Critique of Political Economy, Vol.1 (Penguin);        Nicos Poulantzas, State, Power, Socialism (Verso); David Harvey, The Limits to Capital (Verso); and Maria Mies (1986/2014) Patriarchy and Accumulation on a World Scale: Women in the International Division of Labour. London: Zed Books. Currently, the group is reading The Global Development Crisis (Polity, 2014) by Ben Selwyn.

The main achievement of the group was the collectively written article ‘The enduring relevance of Rosa Luxemburg’s The Accumulation of Capital’ on Rosa Luxemburg’s The Accumulation of Capital (Routledge, 1913/2003) published by the Journal for International Relations and Development in 2014. A jointly written blog post on The Next Revolution: Popular Assemblies and the Promise of Direct Democracy (London: Verso, 2015) by Murray Bookchin followed in 2015.

Overall, however, the main focus has always been on providing space for critical exchange and dialogue. As a colleague of mine recently remarked, with all the hype about impact on policy-making, we should not overlook the crucial importance of training the next generation of Marxist scholars. Considering all the former members, who are now in academic posts around the world and have sent their greetings to the anniversary, it is hoped that the Marxism Reading Group has contributed to this task.