The Critique of Commodification: Moving towards a use-value society? 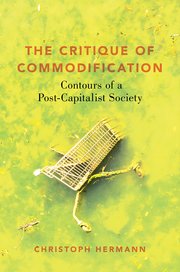 In his new book The Critique of Commodification – Contours of a Postcapitalist Society (OUP, 2021) Christoph Hermann critical investigates the concept of commodification and relates the associated dynamics to current political economy developments. Importantly, he demonstrates how production for profit instead of human needs results in enormously harmful consequences for humanity and nature alike. In this blog post, I will discuss some of the key contributions of this highly important book.

Hermann’s first major contribution is that he clarifies the concept of commodification. While often used and referred to in academic literature, to date there has been no systematic analysis and outline of it. Importantly, rather than adopting a moral or pragmatic critique of commodification, he firmly adopts a Marxist, historical materialist position acknowledging the problems resulting from all forms of commodification. ‘While the exchange of labor for money may be morally questionable, for materialists it is the capitalist application of labor power to increase surplus value that makes it most objectionable’ (P.12).

By drawing directly on the work of Karl Marx, he distinguishes between use value, the satisfaction of needs on one hand, and exchange value or market value on the other, which is geared towards the maximization of profit. ‘Usually it is competition and the profit motive that makes sure that market value comes to dominate use value’ (P.28). Sub-categories of commodification include formal, real and fictitious commodification, further clarifying our understanding about processes of commodification as a whole.

Production for maximising profits, i.e. the production of commodities, comes however with a heavy price. ‘The main threat,’ Hermann argues, ‘is the transformation of our livelihoods, including the destruction of the ecological base of human life and flourishing’ (P.XI). By relegating human needs to a secondary role, ‘commodity production has become an obstacle to urgently needed social and ecological transformation – including, for example, a more sustainable transportation system’ (P.38). In other words, commodification is deeply harmful to human beings and nature alike.

Hermann’s second major contribution is that he unravels in detail the various political-economic processes, through which commodification takes place, including privatization, liberalization, marketization, New Public Management and austerity. New Public Management is an interesting example of fictitious commodification. Rather than relying on markets and the profit motive, here ‘commodification is based on the introduction of quasi-markets, forcing different parts of the same organization to compete with each other’ (P.38). Constant performance measurement and turning citizens into consumers are key strategies in this respect (P.54). Working in Higher Education in the UK, I can confirm that this has become part of our daily working practices due to restructuring over recent years.

The consequences of commodification are dire. Needs which are not backed by purchasing power are being neglected. In many countries, if you cannot pay, your water will be turned off for example. There is a focus on producing those commodities, which secure the highest profits and short-term profits are generally prioritised over long-term sustainability. The quality of services is sacrificed for profitability and products become standardised and homogenised. Essential goods have been turned into items of speculation with at times disastrous consequences for people. As a result of the financialisation of agricultural production, for example, ‘world food prices rose by 83 per cent between 2005 and 2008, with corn prices nearly tripling. Rice prices increased by 70 percent, and wheat prices by 127 percent. Growing food prices, in turn drove at least 40 million more people in the developing world into hunger’ (P.87). As commodification reaches its social, political, systemic and ecological limits, human beings’ very survival is endangered.

Hermann, however, does not stop at defining processes of commodification and highlighting their disastrous consequences. By turning to ‘use value’, he also points to potential, collective ways out of existential crises. The role of nature is key, when illustrating the move from market value to use value. ‘While nature has little if any (marginal) utility, it has an enormous use value. At the same time, nature’s use value is inherently collective: it provides the collective basis of life and human flourishing’ (P.119). Hence, a use-value society can provide the basis of moving from production for profit to production focused on the satisfaction of human needs. ‘A use-value society is a collective project, driven by the development of collective capacities and open to innovation and technological progress with technology serving human needs rather than profit maximization’ (P.152).

Hermann identifies three elements that ‘are crucial for the promotion of use value: democratization, sustainability, and solidarity’ (P.135). In order to ensure a shift towards production for the satisfaction of needs, the economy must be democratised including two key elements. ‘On the one hand, the shift toward self-managed enterprises, and on the other hand, the introduction of democratic planning’ (P.141). When it comes to sustainability, Hermann mirrors to some extent arguments from the degrowth literature, when he suggests that ‘what is needed is an economic contraction in the Global North, making space for some material improvement in the South (P.147). Solidarity, in turn, is crucial as the opposite of (capitalist) competition. Solidarity prioritises the collective good over individual gains. Ultimately, ‘putting common goals before individual interests is not only important for winning concessions from capital; it is also crucial for tackling the ecological crisis’ (P.151).

Importantly, this use-value society is not something, which could only be established after a full-scale transformation of our current capitalist political economy sometime in the distant future. The transformation can start here and now building up incrementally over time. As Hermann concludes his book, ‘positive experience with growing islands of use-value orientation in the sea of profit maximization can, hopefully, pave the way for systemic change, ending capitalism and commodification – and tackling the ecological crisis. In this sense, a use-value society can also be seen as a first step, or transitory phase, in the long journey to an ecologically sustainable socialism’ (P.157).

This is clearly a major intervention in critical scholarship, linking up well theoretical reflections with concrete suggestions for activism. A must-read for everyone interested in progressive ways out of crisis.