European Citizens’ Initiative on Water and the alternative to Austerity Europe

In this guest post, written on request, Jan Willem Goudriaan, Deputy General Secretary of the European Federation of Public Service Unions (EPSU), explains how the European Citizens Initiative (ECI) on the Human Right to Water is part of a broader struggle for change and alternatives to the current policies of the European Commission and most governments.

I was drinking a cup of coffee with Flora recently. She is a colleague of the Greek trade union GENOP, organising workers in the electricity industry. She was in Brussels to present the Greek movie catastroika. That movie tells the story of corporate interests and conservative ideology promoting the privatisation of public companies and services across the world. It is replete with the accounts of workers and citizens that underline how corporations squeeze money out of the need for people for electricity, water, health, education and so many other public services.

Flora told me about the plans of the Greek government, imposed by the austerity policies of the troika. The power company she works for is going to be privatised. The union and citizens are fighting back. Its leadership has been arrested in actions to prevent that citizens were going to pay taxes through their electricity bill. Flora and her colleagues fear jobs losses and increased prices for consumers. We discussed the labour market reforms forced upon workers such as allowing employers to pay below the collective agreement and the lowering of minimum wages. 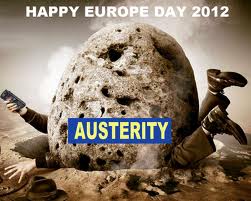 And while it is understood that the forces which drive the destruction of public services and the welfare state are similar in many countries as chronicled by Andreas Bieler in this blog and his publications for example, and that this drive increasingly finds its expression in coordinated EU wide austerity, one of the challenges is connecting the local and national campaigns. Within ETUC, the European Trade Union Confederation, the unions are working together to promote an alternative to Austerity Europe. As part of ETUC, EPSU fully supported the rejection of the Austerity Treaty. Affiliated unions will also be active in the European day of Solidarity and Action on 14 November 2012. EPSU has organized a similar coordinated day of action on public services 30 November 2011

We have, however, also recognized that this is a much broader fight that engages not only trade unions. EPSU has supported the Joint Social Conference, work of the European Anti-poverty network and the 15 years celebration of Corporate Observatory Europe. Such initiatives have brought many people and organisations together to analyse the crisis and work on alternatives. 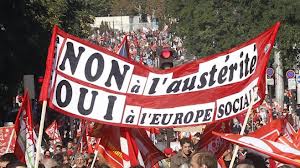 Crumbling our cookies with our coffee, Flora and I also came to speak of the privatisation of water companies such as those of Athens and Thessaloniki, the resistance against it and the imaginative ways such as initiative 136 to keep the companies in citizens’ ownership. Similar struggles take place in other countries such as Portugal, Spain and Italy to mention a few. For many years unions, environmental organisations, social action groups and others have been addressing the challenge to connect our fights. We have been working together to argue for public water at local, national and European level. Now these organisations are joining hands in a European Citizens Initiative on the Human Right to water and sanitation.

Strongly promoted by amongst others EPSU, the aim is to collect over 1 million signatures in all EU countries to put this human right, recognized by the UN, on the EU agenda. The European Commission and several Member States have blocked this so far. The reason for this has probably all to do with the second objective of the initiative. We ask that the European Commission does not take any initiatives to liberalise water and sanitation services and does not subject these services to internal market rules. This is a real threat. When he was European Commissioner, Frits Bolkestein focused on the water sector but was blocked as EPSU and many others in civil society persuaded the European Parliament to vote it down. Now, it is very much back on the European agenda. The European Council pushes structural reform and the opening of network services and the European Central Bank demands this as a condition of governments needing its support.

How entrenched the neo-liberal philosophy is in the European Commission became clear from a letter of the Commission desk officer responsible for Greece. A group of organisations challenged Commissioner Oli Rehn over pursuing privatisation of water companies in Greece and other countries. The Commissioner wrote back that he believes that privatisation is preferable over public ownership and this despite the wealth of information to the contrary. Only large multinational companies would profit. The short letter, less than a page, encapsulates the capture of the Commission by corporate and ideological interests. The sort of Europe most workers and citizens do not want.

The European Citizens’ Initiative for the human right to water is part of the many initiatives to fight the austerity policies and the liberalization agenda. At the same time it envisions a different Europe that builds public services, supports human rights and social justice. It connects work places, local communities and tens of thousands of citizens in a common battle. I hope the reader will sign the initiative. You can do that here . And please spread the word: together we can effect change. Flora and her Greek colleagues are not giving up.