SIGTUR – A movement of democratic unions of the Global South 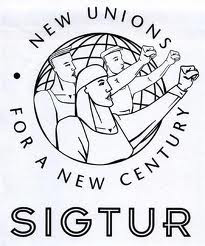 Trade unions are still searching for an adequate response to the onslaught on workers’ rights as a result of neo-liberal globalisation, manifested in an increasing transnationalisation of production processes, the emergence of an integrated global financial market and the informalisation of working contracts. Employers increasingly play off different national labour movements against each other as a result of global restructuring. SIGTUR, the Southern Initiative on Globalisation and Trade Union Rights, is a specific international response by labour movements from the Global South. In this guest post, Rob Lambert, the co-ordinator of SIGTUR, outlines the organisation’s objectives, history and strategies towards a better world order.

SIGTUR is an alliance forming movement of democratic unions in the Global South (Latin America, Africa, Asia and Australia).

‘SIGTUR is a unique space of like-minded unions in the global south. This is a space where we can discuss freely amongst friends, where we have built a deep unity of purpose, which is not contaminated by the conflicts between WFTU and ITUC. Inside SIGTUR we can debate without conditionalities’ (Johannesburg, June 2013).

Such a voice is shaped by the historical experience of workers in the Global South. This is an experience of plunder and exploitation through trade in resources and persons (the slave trade and indentured labour systems). In this we witness how capital came into being, ‘dripping from head to toe, from every pore, with blood and dirt’. This was the experience of the colonial period, which many activists know only too well through their family stories over generations.

I am a product of the indentured labor system. My father was forcibly transported from India to Malaysia. I grew up in semi-slave conditions. I experienced inner feelings of racial domination my whole life.

This past has shaped the present as new forms of imperialism reflected in the strategies of global corporations continue the pillage of the Global South, promoting and reinforcing slave like, cheap labour conditions across all continents.

SIGTUR as a space to share our experiences creates a new identity unique to the Global South, which is a potential source of power and commitment.

Past and present repression against unions (see how Korean union leaders are constantly being thrown into jail by their ‘democratic’ government) has formed a particular culture of struggle in the Global South.

The space SIGTUR creates also enables a sharing of organisational experience, so the stronger more well established federations can share their methods of organising and struggle with the newer unions.

SIGTUR is not just a space to share a common southern experience, even though this emerging wider social consciousness is vital to drive the struggle. SIGTUR is a space to develop an alternative vision to that of neo-liberal globalisation.

It is a space to forge, over time, a new, anti-free market politics. This has grown out of the mass protests across the south over the past two decades.

It is a space to challenge global corporations, the banking system and the elites who profit from their exploitation.

Finally, it is a space to find new sources of power and new strategies and to organise action, linking the local to the global to mobilise against these forces. (See section below).


How did SIGTUR come into being?

SIGTUR is the realization of a vision, which COSATU leaders had in the late 1980s, when they sensed that the advent of the free market ideology spelt disaster for working people across the globe and in the Global South in particular.

The then General Secretary of COSATU, Jay Naidoo, asserted that a south/south internationalism needed to be constructed.

COSATU found a willing ally in the Australian trade union movement (the ACTU: Australian Council of Trade Unions) who were themselves concerned about the ‘race to the bottom’ that neo-liberal globalisation represented.

The Australian unions had a strong historical tradition of an activist labor internationalism. After the Second World War they blocked Dutch ships carrying troops to retake ‘their colony’ Indonesia. During the Apartheid era, they placed bans on South African shipping.

And so SIGTUR was born out of a creative, proactive response to the radical market ideology of neo-liberalism, which has created such destruction across the globe.

SIGTUR was launched at a meeting of democratic unions from the Global South in May 1991 in Western Australia.

From this small beginning of two labor movements coming together to create something new, the initiative has grown over the past twenty years and now embraces movements in 35 countries and four continents.

What kind of labour internationalism?

COSATU leaders had a simple proposition: if a new style of democratic unionism at a national level in South Africa empowered workers in the bitter struggle against racial capitalism in South Africa, could this model not be applied to organising at an international level.

A new style of democratic unionism evolved in South Africa during the 1970s, one that created space for workers to participate actively. It gave them a voice for it was based on the principle of worker control. It reclaimed their humanity, their dignity. This is the style applied to this southern initiative.

Free market (neo-liberal) globalisation has been socially destructive on a massive scale, right the way across the globe and in the Global South in particular.

Today the net worth of the 358 richest people in the world, the $ Billionaires, is equal to the combined income of the poorest 45% of the world’s population, 2.3 billion people.

The free market system on a global scale leads to a massive concentration of corporate power. In all sectors, just ten global corporations control 70 per cent of the market. This gives them power greater than most nation states.

They are able to bend governments to their will: undermining laws everywhere, which defend nature and society.

These corporations are themselves driven by the dominance of finance capital. Investment banks, private equity and hedge funds have turned stock markets into casinos, speculating and destabilizing societies across the globe. The ongoing global financial crisis is wreaking havoc across the Global South and in the north, yet no persons or banks have been held to account for the massive losses.

Without doubt, it is hard not to be pessimistic in the face of this combined and coordinated power of capital. However, there is another side to this phenomenal concentration of power. Neoliberalism has led to a very tight integration of the global economy.

Just in time production systems means that companies keep no stock. They are highly dependent on smooth running transport and communications systems.Through systems of outsourcing, global production networks have been created. These systems are highly integrated. Companies are utterly dependent on the smooth flow of commodities through these systems.

In short, the neo-liberal freedoms of trade, investment and finance, will become the gravediggers of the system, if the working class becomes globally coordinated and if unions imagine and organise new forms of power to massively disrupt these systems until capital and its political allies come to the bargaining table.

The democratic union movement in the Global South has the capacity to imagine, plan and organise new forms of resistance to defend society and nature because they have been down that road at a national level as they engaged in national liberation struggles.

So what has SIGTUR done?

In its relatively short history, SIGTUR was the first union body in the world to experiment with disrupting the tight integration of the global economy that neo-liberalism had created when it successfully organised three shipping boycotts to defeat the neo-liberal agenda in Australia.

The first shipping boycott was planned as a global strategy in 1995, when the Western Australian state government prepared new anti-union labor laws, based on a system of individual contracts. SIGTUR communicated the predicament of Australian workers and boycott plans were developed. The COSATU NEC stated that they could not stand idly by while Australian workers were being attacked. The solidarity actions of Australian workers (shipping bans) were still fresh in the memory of the NEC members.

As a result of this action, these laws were withdrawn. The same tactic was utilised in April 1998, when the Conservative government in Australia developed an illegal scheme to de-unionise the Australian docks. COSATU in league with the International Transport Federation (ITF) again triggered a shipping boycott.

SIGTUR also organised various global protest actions at Embassies with regard to imprisonments in Korea, the Philippines and Thailand.

When an Australian construction company, Boral Australia, refused to bargain with the democratic union in the Indonesian branch of the company, P T Jaya Ready Mix, SIGTUR organised a global campaign of support in which the Australian Manufacturing Workers Union (AMWU), played a key role. The company caved in and Boral ordered its Indonesian branch to recognize the union.

‘We understand that all victories seem small victories, however the victories evoke a spirit of resistance where workers unite and fight for all.’

A second illustration of this mode of action that SIGTUR has promoted and developed is the Hyundai struggle in Chennai India. CITU, the leading Indian federation, led a campaign for union rights in the Hyundai plant. These rights were refused. Management had a shocking attitude to Hindu culture, smashing icons at work stations. There were strikes and Gandhi styled passive resistance in the community. The KCTU from Korea participated in these protests as a mark of solidarity with the Indian workforce. They joined a human chain around the factory.

In turn, Indian workers visited Seoul to express their solidarity with the struggles of workers against casualisation in Korea. Both workforces have attempted to synchronise their collective bargaining strategies and the Maritime Union of Australia has joined these struggles.

Companies try to set one workforce against another within the same corporation. SIGTUR is in solidarity with these local struggles stimulating these global responses.

In Conclusion: Fighting for an alternative to neoliberalism

SIGTUR recently launched a Futures Commission, which has established a process of ongoing debate between labor committed intellectuals and SIGTUR leaders which attempts to specify an alternative model to neoliberalism grounded in short term, realizable goals as a basis for the long journey to a deeper transformation (see also SIGTUR’s Futures Commission and the search for alternatives in and beyond capitalism!). This recognizes that the struggle against the market model also needs to be driven by a vision of a new kind of economy, society and politics.