Super-exploitation and resistance: different forms of workers protests in China. 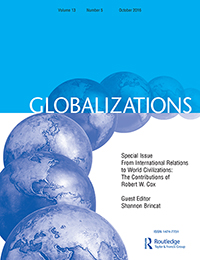 China is frequently considered to be an example of successful developmental catch-up. And yet, the country’s impressive growth rates are to a large extent based on the super-exploitation of its workforce expressed in long working hours, low wages, and a general lack of basic welfare benefits such as medical insurance and work-injury insurance (Chan and Selden, 2014, p. 606). In our recently published article ‘Exploitation and resistance: a comparative analysis of the Chinese cheap labour electronics and high-value added IT sectors’, published in the journal Globalizations and freely accessible online, Chun-Yi Lee and I compare the electronics sector in the area of Shenzhen, based on cheap labour assembling goods for export, with the IT sector in the area of Shanghai, relying on a more skilled workforce manufacturing high-value added goods. It is asked in what way these rather different locations within the global political economy condition the form and contents of resistance in these two sectors.

A closer analysis of the Chinese production structure reveals a rather fragile picture of Chinese economic growth. First, China has mainly focused on low value-added, cheap labour industrial sectors in its industrialisation drive. Thus, it has become the major regional assembly platform in Asia. A large part of regional trade is the trade in parts and components especially in ICT products and electrical goods in the direction of China, where they are assembled on the basis of cheap labour (Hart-Landsberg, 2013, p. 34). In turn, these products are mainly destined for markets in North America and Europe integrating East Asia tightly with the global economy, but also making it dependent on continuing demand in the Global North. Equally important, Chinese exports are dominated by foreign TNCs, which control about 85 percent of China’s high technology exports (Hart-Landsberg, 2015, p. 5). In short, China’s production is mainly based on cheap-labour, low value-added activities, dominated by foreign TNCs and highly dependent on access to markets elsewhere. Our first case study the electronics goods sector in the Pearl River Delta (PRD) around Shenzhen characterised by companies such as Foxconn is precisely part of this cheap-labour, export-oriented strategy.

Nevertheless, China’s technological capacity is also characterised by unevenness. Cheap labour and low technology production are combined in some areas with medium and small pockets of advanced technology. Our second case study of the IT industry in the area around Shanghai, the Yangtze River Delta (YRD), is an example of higher value-added production. It rose as the second regional driver of massive FDI into and export out of central costal China during the 1990s and into the 21st century. This model heavily relies on careful planning and aggressive action by the municipal government to create an attractive environment. The most prominent and successful planned projects are the Suzhou Industrial Park (SIP) as well as the Suzhou New District (SND).

As a result of these different locations within the global political economy and diverging social relations of production, the social class forces of labour are rather different in both industrial sectors. In the electronics sector in the PRD, workers are generally less skilled and the turnover of the workforce is high with cheap labour being easily replaced. By contrast, employment relations in the IT sector in the YRD are more stable and the workforce more highly skilled. In what way do these rather different locations in the global economy condition the types of class struggle?

These rather different social relations of production and their different locations in the global political economy, we argue, have a strong influence on the type of informal labour NGOs in the two sectors as well as the nature of labour NGO – government relations. As our empirical findings in the article indicate, with work in the electronics industry in the PRD being based on cheap labour and super-exploitation, industrial conflict is more likely. Labour NGOs, often not officially registered and not accepting government money, assist workers in getting their individual, but also collective rights vis-à-vis employers.

By contrast, the higher-value added production in the IT sector in the YRD requires more stable employment relations and, therefore, better working conditions to ensure a more satisfied workforce. The state is much more involved and informal labour NGOs, which willingly accept government funding and register officially, concentrate on organising interesting cultural activities for workers’ free time. They almost perform a mediating role between employers and employees, supported by the government, in order to ensure a smooth functioning of the more high-value added production process.

Worker militancy has not been without success in the PRD. As a result of class struggle, export industries have been forced to accept significant wage increases in recent years. ‘Between 2008 and 2012, nominal statutory minimum wages increased annually by 12.6 percent on average’ (Chan and Selden, 2014, p.605). When the Chinese economy recovered after the global financial crisis and workers became stronger and more militant again, the Chinese state felt compelled to take their demands seriously and intervene with more pro-labour policies. Nevertheless, the state and employers have not only given in to workers’ increasing unrest. On the one hand, yes, the state passed some pro-labour policies including increases in the official minimum wage. On the other, it has clamped down on informal labour NGOs especially in the PRD, considered to be involved in recent unrest (Pringle, 2015). Equally, while employers have upgraded some of their production facilities, these struggles continue to be embedded within the wider global capitalist dynamics. Some manufacturing units have been transferred to countries with cheaper labour such as Vietnam. Hence, the success of struggles in China will ultimately also depend on the outcome of struggles in other countries.

Andreas Bieler is Professor of Political Economy in the School of Politics and International Relations, University of Nottingham/UK

Chun-Yi Lee is Lecturer in the School of Politics and International Relations, University of Nottingham/UK.

We acknowledge the grant of £275k by the Economic and Social Research Council (ESRC) for the project on ‘Globalisation, national transformation and workers’ rights: an analysis of Chinese labour within the global economy’ (RES-062-23-2777). The article, on which this post is based, is part of our outputs from this research project.
Posted by Andreas Bieler at 11:54