When Markets Meet Central Planning.... Or How Russellton became Poppleton

Higher education in England is being subjected to sustained marketisation with undergraduate degrees in arts, humanities and social sciences now financed by student fees and the numbers cap set to be lifted after 2015 (likely to be followed by the fees cap). Just as the introduction of this market is centrally planned by Government, so University management is increasingly centralised and its decisions implemented via key performance indicators that purport to act as market proxies. In this guest post, John Holmwood discusses how at the University of Russelton - pre-1992 older sibling to the post-1992 University of Poppleton - this brave new world is currently being pursued via a central workload plan.

In order to address 'efficiency' and ‘equity’ across its various activities, Russelton decided to introduce an hours-based workload model to make the allocation of staff time transparent. Previously, different units operated their own models based upon local criteria. Now, a single model has been adopted. To be sure, different units can initially assign different weights to their various activities, but these will be subject to review as part of ‘institutional learning’, with the expectation that time allocated to like activities will converge across Russelton. 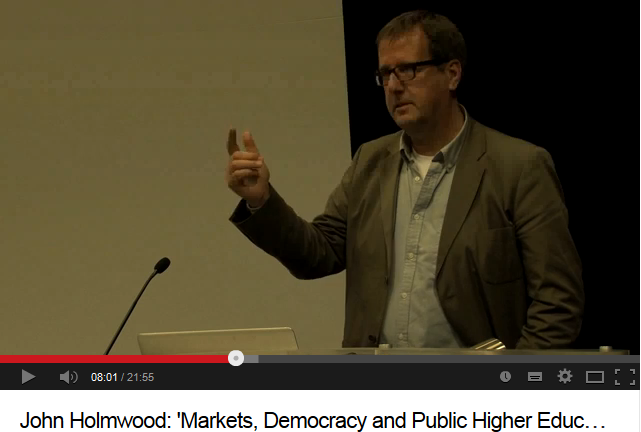 Some weights, however, will be fixed from the outset by decision of senior management. Only 30% of time will be allocated to internally funded research (this includes study leave entitlement, so, is, in fact, 20% of time in a normal academic year). Senior managers believe this will incentivise research grant capture, through which staff can buy themselves out of other activities. However, this allocation is very low compared with other universities in Russelton's mission group (where 40%, not including study leave, is common).

The Transparent Approach to Costing (TRAC) methodology stands behind an hours-based workload model. The latter assigns hours to different activities for the purposes of attributing indirect costs. It was introduced in the context of recovering indirect costs for externally-funded research, which encouraged overstatement of research activity. Since these costs were charged out, there was no incentive for universities to reduce indirect costs charged to external bodies (primarily Research Councils). This gave rise to considerable variation across universities and the acceptance by Research Councils of whatever TRAC data. However, following the Wakeham Report (2010), above average TRAC estimates are now being addressed in efficiency cuts to charged-out indirect costs.

One unintended consequence of TRAC was that teaching costs were understated with the peculiar consequence that most Vice Chancellors found themselves in the awkward position of arguing that the home student fee plus HEFCE allocation (at approx £7.2k) was less than the true cost, while TRAC data (which inflated research costs) showed an average £6k spend on teaching. This is the information that informed the Government's setting of £6k as the lower threshold in the £6-9k range fee range.

Most universities adopt what might be called a 'points and percentages' approach to workload modelling for internal purposes. That is, departments are allowed to work out rough balances and weightings between their different activities to establish what is to them an equitable teaching and administrative load for staff while maintaining research activity. Generally speaking research was assigned a percentage weight (typically 40%) and 'points' modelling was applied to teaching and administration in order to achieve an equitable balance while protecting research time.

What happens when this approach meets TRAC?


Under TRAC, academics assigned hours to their activities, tending, as we have seen, to assign more hours to research. Most found they were working longer hours than was available within TRAC. What was recommended was that these should be represented as %ages and assigned hours to add up to the TRAC allowed weekly total. In this way, the implications of TRAC could be ignored.

The Wakeham report on TRAC lamented that few universities used TRAC for internal accounting. Enter a willing Russelton, where managers believe in rational allocation and transparency and, perhaps, also want to show students they are getting value for money. They are also concerned about staff ‘overworking’. Here the weightings of the 'points' model are to be mapped directly onto the TRAC hours model. Notice, too that the decisions about allocation of hours to internally funded research will have implications for the indirect costs that can be clawed back via FEC – at a stroke, Russelton has offered efficiency savings beyond those required by Wakeham, should it choose to submit its workload allocations rather than TRAC audits.

Russelton assigns 1840 hours to the academic year of which, in a normal academic year, 312 are now determined to be for internally funded research. The balance of hours are made up of teaching, administration and university citizenship. The discovery is that whereas academics were working long hours, now they can't get their teaching and admin hours up to target. How can this be? TRAC had limited categories and no category of scholarship (keeping up with the field etc), only delivery of teaching, direct preparation of teaching and administration associated with teaching (and equivalent for research). And this is so for the Russellton workload model. So, a contact hour of teaching might be weighted as requiring 2 hours of preparation once it had been delivered once (additional weighting might be given for the first time of teaching a module, but for the sake of argument assume a relatively stable curriculum – though of course, there is the issue that any buy out of teaching hours will be new teaching for the member of staff taking it on, so is potentially unfunded in a balanced workload model, or at least, has to be funded out of the research hours allocation).

Russellton has just revised its curriculum guidance to increase undergraduate student contact hours, in the face of the new fee regime. Under this guidance, a second and third year module will have three contact hours a week for 11 weeks. This provides just 99 hours in the model towards the overall target for teaching and admin/citizenship. Imagine a heavy work load of 3 + 3 modules per member of staff. This would only deliver 594 of the target of 1528 hours (net of research)! And, of course the curriculum might need fewer modules than the total number of staff x 6!

But the management and senior planners at Russellton are committed to providing an excellent and flexible service, to support academics who are excellent in teaching and research. They also believe in transparency, however, and suggest that while there are certain norms applying to weightings etc, they want to hear from departments how they would weight different kinds of assessment. So, academic staff gather to discuss the workload. They notice that teaching doesn't seem to be rewarded and so they think of what they might inflate. They decide that the time taken to mark the assessment for each module should be boosted - say 90 minutes, or even 2 hours per item. It doesn't matter. Imagine 40 students per module. That provides 80 hours x 6 = 480 hours. Added to teaching hours, a member of staff is still well short target. And remember, the purpose of the plan is to encourage efficiencies, including perhaps the monitoring of the ‘assessment burden’.

In fact, it would be better to have more students in the class and do more marking, but, of course, that is true of all members of staff and there aren't enough students to go round   - numbers of students in modules can increase only if the number of modules decreases, but that makes it difficult for staff to meet teaching targets. Moreover, the process turns academic staff into GTAs

Better turn attention to admin/ citizenship. Clearly, the issue is to assign more time to administration tasks. Notice that Benjamin Ginsberg has already written in The Fall of the Faculty of the changing proportion of administrative staff to academic staff, but even he didn't imagine the transformation of academic staff into administrators and GTAs as a grand university make-work scheme arising simply because its senior managers had forgotten its primary purposes of scholarship and research.

Of course, whereas previous workload models were ‘owned’ by units and were integral to whatever collegial relationships remained. The new workload model is ‘owned’ by the HR division. Staff at Russelton are assured that their immediate colleagues will not have access to individual workload data; only unit managers and senior managers will have access. Openness to managers is not the usual definition of transparency, however, and staff are denied the possibility of assessing how the workload operates. Instead, they should be satisfied that everyone’s hours of work add up to 1840 per year. However, the senior managers are also likely to be interested in the distribution of tasks by salary grade and, perhaps, by ‘job families’ (a practice well-institutionalised at Poppleton).

Paradoxically, all of this is associated with the marketisation of the university, despite it producing the worst excesses of central planning. Students are a source of income, but each increase in student numbers adds the same amount to income, while reducing the marginal cost of teaching. As student numbers increase, they can be taught more efficiently, but more staff cannot be employed because that would make it more difficult to meet the teaching hours target! Given that all staff are struggling to meet targets, income can never be used to employ staff engaged in core academic functions because that would potentially make it even more difficult for everyone else to meet targets. In fact, research performance remains important to senior managers – not least in promotion -despite the reduction of time allotted to it. The maintenance of research activity now has three sources of funding – externally-funded, internally funded and self-funded (in hours additional to the 1840 assigned to the academic year).

What are the conclusions? In a market system, you can't show students that their fees go directly to teaching though an hours-based model. In a market system, you can't use the techniques of central planning to override the market. As managers, you should allow autonomy to units and require only that the workload model is transparent and equitable for the members of the unit. There needs to be recognition of the category of ‘scholarship’ that sustains the humanities and social sciences and is neglected in TRAC and the Russelton workload model alike.

Meanwhile, staff at Russelton feel as if they are employed at Poppleton, while senior managers report surpluses to Council (encouraged by their own performance indicators and related pay). Senior managers need to recall the purposes of a university and that they are delivered by its staff, not its managers.