Victory in the 2011 referendum against water privatisation had been emphatic. More than 57 per cent of the Italian electorate cast their vote and both questions related to water had been approved by a majority of more than 95 per cent (see Road to Victory). And yet, those who expected that these decisions, legally binding according to the Italian Constitution, would now be implemented, were disappointed. Based on my interviews with leading activists of the Italian water movement, in this post I will assess the situation since the referendum in 2011.

Almost immediately after the referendum, the Italian government moved against the outcome. First, it disempowered municipalities in that an independent national agency was entrusted with the task of setting water tariffs. A complex mathematical equation is put forward, which municipalities have to translate into their particular situation. Second, the principle of the EU Stability Pact of balanced budgets was transferred to the level of Italian municipalities. With their financial possibilities constrained, those municipalities, in which water services had already been privatised, would find it difficult, if not impossible to buy back private shares, especially against the background of the Eurozone crisis.

Moreover, the second question of the referendum abrogating the right of private companies to a guaranteed profit of seven per cent has never been really implemented. In the latest twist of turns the formula, calculated in exactly the same way, has been re-introduced at the slightly lower level of 6.4 per cent. The Forum Italiano dei Movimenti per l’Acqua challenged this unsuccessfully in the Administrative Tribunal of Milano in March 2014.

Big transnational corporations such as Suez are involved in making profits through the management of water services and capital in general has increasingly focused on privatising public services as an excellent opportunity of reaping large profits backed by the state and, thus, ultimately tax payers. It was these forces, which had pushed at both the Italian and European level to ensure that the Italian referendum did not result in a wave of re-municipalisations of services in Italy and elsewhere. Interestingly, when activists of the Arezzo water committee spoke with the ‘independent’ agency in charge of setting water tariffs, they suddenly noticed a thick file entitled ‘Meetings with Suez’ on the shelf behind the agency official. Clearly, there are close ties between private companies, political parties and these ‘independent’ regulatory agencies.

In my interviews with water activists, it became clear that despite these setbacks it would be wrong to argue that there have been no positive results. First, and perhaps most importantly, the 2009 law of the Berlusconi government, enforcing water privatisation on all municipalities, has been abrogated. Hence, many water companies such as in Torino and Milano are still fully owned by local government, even though they may operate like a private company. Further privatisation has been stopped.

Second, the city of Napoli has made the step and re-municipalised water services. A group of lawyers had worked together closely with the water movement and one of them was given the task by the mayor of Napoli to organise this step. Third, the Italian region of Lazio passed unanimously a law on 20 March 2014 that is intended to facilitate the return of water management into the hands of local authorities. There is still a momentum behind the water movement.

Furthermore, the movement has revived the national law initiative against water privatization of 2007 (see Road to Victory) and formed close ties with an inter-parliamentary group of more than 200 Members of Parliament (MPs) including all MPs of the parties Cinque Stelle and Sinistra Ecologia Libertà (SEL) as well as a few members of the Partito Democratico (PD). This group is in the process of putting forward a revised and updated version of the draft 2007 law by popular initiative.

In short, there has been some success and there is still momentum behind the movement. Current discussions about what to do next, however, indicate increasing divisions inside the movement. 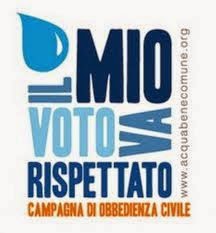 When it became clear after the referendum that attempts were made to block the implementation of the outcome, the movement as a whole adopted the campaign of ‘civil obedience’, devised by the Arezzo water committee. It was related to the second question of the referendum against the guaranteed profit of seven per cent and was called ‘civil obedience’ rather than ‘civil disobedience’, because the initiators argued that by withholding the seven per cent of their water charges when paying the bills they actually complied with national law resulting from the referendum. On the basis of this experience and against the background of having been blocked again and again in the political sphere, the water committee in Arezzo is now amongst those local committees, which strongly advocates direct political action based on the self-organisation of citizens. These committees are no longer prepared to engage in further political initiatives such as collecting signatures.

Nevertheless, while successful and adopted by many in some areas of Italy such as Arezzo, Pistoia and Aprilia, in other areas people were less enthusiastic about the ‘civil obedience’ campaign and felt that it was not a suitable strategy forward. In Torino, for example, there was an attempt to adopt the campaign. Considering, however, that many people live in large apartment blocks, where the payment of water charges is sorted out by an administrator, this was never likely to become a mass action. Hence, the focus in Torino has been on the example of Napoli and the re-municipalisation of water services. In the province of Torino, the water company operates like a private water company, but is still fully owned by Torino and the other smaller municipalities in the province. Similar to the Tuscan regional and the national laws by popular initiatives, the Torino water committee put forward such a law towards the full re-municipalisation of the water services company. And again, as in the other cases, the local parliament first refused to consider the law and, when it finally did, argued that the re-municipalisation was not feasible on legal and financial grounds. In response, the local committee currently attempts to convince several smaller municipalities within the province to put pressure towards municipalisation from within the company board, where they are represented as one of the share-holders.

The Comitato Italiano Contratto Mondiale sull’Acqua, representing the water movement in the city of Milano, neither supported the ‘civil obedience’ campaign, as it argued that focusing on the price for water in Milano, which has one of the lowest water tariffs not only in Italy but in the whole of Europe, would make no sense. It also does not work towards the re-municipalisation of the local water company. Workers in the company would not want it, as employment in the public sector was less good, and it would also make no sense as the Milano water company does not own the full water cycle. Instead, the focus should be on pushing through a law at the national level guaranteeing people’s access to water similar to a law in Belgium.

With various local committees going into different directions, tensions have also emerged between local committees and the national Forum. First, several committees from Southern Italy criticize the national Forum for taking too much of a strategic lead. The national Forum and its secretariat, they argue, was established to assist local committees, not tell them what to do. Second, the committee of Arezzo accuses the Forum of emphasizing too much the political level with its intentions of calling for a large demonstration in mid-May and neglecting the organization of citizens around direct action initiatives. On the other hand, the Comitato Italiano Contratto Mondiale sull’Acqua criticizes the Forum for not being enough political. Supporting the Arezzo initiative of ‘civil obedience’ would have lost the movement time, when it had been important directly after the referendum to use the popular momentum and demand a national law.

There are also tensions within the movement over the contents of the campaign ahead. Some argue that it was no longer enough to focus almost exclusively on the issue of water. A broader campaign would be needed against the privatization of all public services. The question of democracy should be raised considering how the political system had dealt with the referendum results and the movement should also discuss ways of how to re-claim political control over finance, considering how important the financial situation is for re-municipalising water services. Others, however, point out that it had been water and its symbolic power, which had made it possible for so many diverse groups and citizens to come together. Broadening the thematic focus of the movement would risk that some members may be alienated.

Such thematic discussions are closely linked to strategic considerations. Should the water movement attempt to establish a broader movement, including all those other movements, which struggle against privatization and neo-liberal restructuring elsewhere, as, for example, the No-TAV campaign against the construction of the highly controversial high-speed railway line in the Val di Susa in Northern Italy or the Rifiuti Zero campaign? Again, some argue that this could alienate members, who have a particular focus on water. Perhaps, a network of these various networks rather than a uniform organization is the better way? This would allow these networks to acknowledge common problems and co-operate on common ground, while still being able to emphasise the particular issues of their own campaign.

What future for the Italian water movement?

As a leading activist explained to me, there is never one correct strategy forward. It is the multiplicity of strategies depending on different local circumstances, which may be the way forward towards proper implementation of the referendum outcome. Importantly, the campaign has succeeded in establishing that the public is again considered in Italy as a potential alternative to the market. The movement put forward the idea of a new form of public company, in which workers and citizens are directly participating in water management.

This discussion also facilitated the introduction of the commons into popular discourse. ‘Elements that we maintain or reproduce together, according to rules established by the community: an area to be rescued from the decision-making of the post-democratic elite and which needs to be self-governed through forms of participative democracy’ (Fattori 2011). It is this kind of visions, which indicate the potential for transformative change in the management of water and beyond.

La lotta continua – the struggle for public water goes on!