Fighting against water privatisation in Italy: Road to Victory! 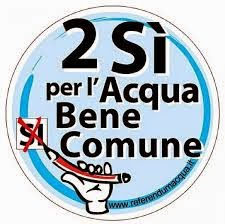 Against the background of the global and Eurozone financial crises as well as austerity sweeping across Europe, the pressure on privatising public services is immense. The story of the Italian water movement, a broad alliance of social movements and trade unions, which successfully mobilized for a referendum against the privatization of water in June 2011, is a story of hope for alliances involved in resisting privatization elsewhere. From 25 March to 8 April, I conducted a series of interviews with members of this movement. In this post, I will report on the emergence and ultimate success of this movement in the referendum.

The emergence of the water movement

Water privatisation arrived first in the Italian region of Tuscany in the late 1990s, early 2000s. The French water company Suez, for example, acquired a stake in the local water company in Arezzo in 1998 and then in Firenze in 2001. Almost immediately, privatisation led to a drastic increase in water prices. Today, water bills in Arezzo are four times as high as in Milano, where the company is still fully in public hands. Unsurprisingly, the water movement emerged in Tuscany, first in the organisation of various local committees such as in Arezzo in 2001, then in the region as a whole.

Further impetus was provided by the holding of the first Alternative World Water Forum in Firenze in 2003, itself inspired by the first European Social Forum held in the same city in November 2002. While the focus of this forum was the right to access to water at the global level, experiences from water privatisation in Latin American countries, where French TNCs had reaped huge profits, made Italian participants aware of similarities with their own situation. The establishment of the Tuscan water forum followed. Inspired by the emergence of further local committees beyond Tuscany and because of the increasing need to co-ordinate local activities, the Forum Italiano dei Movimenti per l’Acqua was established in 2006 as a broad network with a national secretariat in Rome.

Members of the Forum reached across society including Funzione Pubblica-CGIL (FP-CGIL), the largest Italian trade union federation, as well as the rank-and-file unions Cobas and USB, environmental groups such as the Italian section of WWF and Legambiente, ATTAC Italia, the left-oriented network of social centres ARCI (Associazione Ricreativa e Culturale Italiana) as well as the catholic network of social centres ACLI (Associazioni cristiane dei lavoratori italiani). The NGO Comitato Italiano Contratto Mondiale sull'Acqua participated from the beginning and had been crucial in bringing the issue of water from the international level to Italy in the 2003 meeting of the Alternative World Water Forum in Firenze.


The Italian constitution provides citizens with the opportunity of proposing a law by popular initiative. If enough supporting signatures are collected, these laws have to be dealt with by parliament. The drafting of such legislation against the privatisation of water and the collection of enough signatures was first accomplished at the regional level in Tuscany in 2005 and then successfully repeated at the national level in 2007. The main impetus for the referenda in 2011, however, provided a law by the Berlusconi government in 2009, enforcing privatisation by requiring municipalities to put water contracts out for tender. In response, the water movement first collected signatures in support of two referendum questions against water privatisation and then campaigned for the referendum itself. Referenda in Italy, provided they are endorsed by 50 per cent plus one person of the electorate, acquire immediate legal status, but can as such only abrogate laws. The referendum on water included two questions. ‘The first question cancelled the legal obligation to privatise the management of water services’ (Fattori 2011), i.e. the 2009 law of the Berlusconi government. The second question removed the legal right of private investors to make seven per cent of profit on their running of water services. Together, both questions removed the rationale for private involvement in water distribution.

Tensions within the water movement

Tensions in alliances within and between trade unions and social movements are normal and the Italian water movement was no exception in this respect. First, there were tensions inside CGIL, the largest Italian trade union confederation. While Funzione Pubblica strongly supported the movement against privatisation, the smaller federation FILCTEM - Chimica, Tessile, energia, manifatture, which actually organises workers in privatised water companies, played no role. Having a much more narrow vision of its tasks as a trade union, it argued that it does not matter whether a company is private or public as long as the workers of these companies have good salaries and working conditions. In the end, CGIL as the confederation came down on the side of Funzione Pubblica during the referendum campaign. Nevertheless, there had been genuine concerns about unsettling the balance between forces on the right of the union, focusing on social partnership and social dialogue with employers and the government, and forces on the left and their emphasis on broader alliances and wider struggles.

Inside the movement, the large Funzione Pubblica struggled with the form of co-operation, in which each organisation had the same weight regardless of the number of its members. From a representative democracy perspective, this was regarded by some as undemocratic. Moreover, while some individual members of the other two confederations CISL and UIL may have participated in local water committees, these confederations themselves played no part.

In general for many within the Italian trade union movement there had been concerns about co-operation with other, often more radical organisations. The G8 meeting in Genova in 2001 and the violence occurring around the large counter-demonstration at the time were still fresh in the memories of union activists. While the rank-and-file unions USB and Cobas had no problems with this, being already involved in all kinds of networks and alliances as a result of their very different constitution and ideological outlook, mainstream trade unions have had concerns about co-operation with so-called alter-globalisation groups, which were outside their control.

Moreover, initially some trade unions had believed that privatisation may actually be a way of modernising water companies. Just because water companies were owned by the state had not meant that they were run well and, in fact, Italian state companies were often accused of being rather inefficient as a result of nepotism and corruption. Even more narrowly, there were tensions over how to evaluate companies, which were fully owned by the public as share-holder, but operated according to market principles. Some within Funzione Pubblica argued that such a company was a public company and this type of company should therefore be the goal, while others in the water movement pointed out that only once a public company operates outside the market without the objective of making profit can it actually be considered a proper public company. It was a joint research project by FP-CGIL, ARCI, Associazione Rete Nuovo Municipio and ATTAC Italia, which published the book 15 anni dopo: il pubblico è meglio (Ediesse) in March 2007. This provided the basis for trade unions and here especially FP-CGIL to accept that the public, not the market is the better provider of services and ensured an organic connection between the various members of the movement.

On the other hand, many social movement activists had concerns about co-operating with trade unions, which they perceived to be conformist and part of the establishment. They accused them of over-looking the plight of the increasingly large number of precarious workers. Finally, ACLI and ARCI, although they deal with similar social problems, come from very different ideologically backgrounds. While ACLI is affiliated to the Catholic Church, ARCI is a left-wing, antifascist movement. How was it possible to unite such a variety of different organisations successfully?

Water as the rallying point on the road towards victory

The theme of water, the symbolic power of water as a fundamental source of life was mentioned again and again by my interviewees as the single most important reason for why it had been possible to bring together such a variety of different organisations in this campaign (see Fantini 2014). For example, CGIL federations are in disagreement with USB and Cobas on all trade union issues, but the water movement is the one place, where they have come together and work jointly. And it was not only different organisations, individual citizens too rallied around the theme of water and voted ‘yes’ to both questions in the referendum. While centre-right parties such as the Lega Nord had not endorsed the referendum, many people who normally vote for centre-right parties also supported the referendum.

Beyond the theme of water, however, the water movement had made a number of key strategic decisions, facilitating the positive outcome. First, it consciously decided not to portray the referendum as a left-wing campaign, but to provide it with a broad appeal. Hence, political parties were relegated to a secondary, supportive committee. They were not allowed to play a central role.


Second, all organisations agreed on the three necessary legs of the campaign: (1) the workers in the water sector, hence trade unions; (2) citizens as the consumers of water, hence social movements; and (3) municipalities, who are responsible ultimately for the provision of water. A group of over 200 municipalities formed the Associazione Rete Nuovo Municipio, participated in the Forum and worked towards the public provision of water services.

Essential, too, was the double structure of the movement’s organisation. On the one hand, the Forum was present at the nation level with a national co-ordination team consisting of representatives of all the various alliance members. On the other, the movement was organisationally present at the territorial level in all Italian regions including often also the provincial and local level. The latter ensured constant direct contact with citizens across Italy and it was this direct interaction in the streets, which had been essential first to collect enough signatures and then to ensure a large turnout on the day of the referendum itself.

Finally, it was a general learning process for everyone involved. It was in the process of collective struggle that the water movement developed into a homogenous actor and became more than simply the sum of the participating organisations. As one interviewee outlined, the drafting of the law in 2007, for example, was a genuine collective effort. About 200 people participated in the actual process of writing and various drafts had been discussed by around 10000 people across Italy. While time-consuming and cumbersome, this long process allowed the water movement to mature.

When the referendum took place on 12 and 13 June 2011, the victory of the water movement was overwhelming. For the first time in 16 years, it had again been possible to secure the quorum of at least 50 per cent plus one voter participating. In fact, just over 57 per cent of the electorate cast their vote. The majorities in relation to the two questions on water were even more impressive. ’95.35% yes (4.65% no) on the first question; 95.80% yes (4.20% no) on the second’ (Fattori 2011). The victory could not have been more decisive. But was it enough to ensure that water services would stay or be transferred back into public hands? In the post La lotta continua on the Italian water movement, I am looking at the developments since the referendum in 2011 until today.